Monday marks the 80th anniversary of the publication of the very first Billboard chart – and its remarkable Canadian connection.

The Billboard Music Popularity Chart, as it was called when it debuted on July 27, 1940, ranked songs based on sales figures provided to the trade publication by dozens of record stores across the U.S.

At No. 1 on all three charts – National, East and West – was Tommy Dorsey’s recording of “I’ll Never Smile Again.” 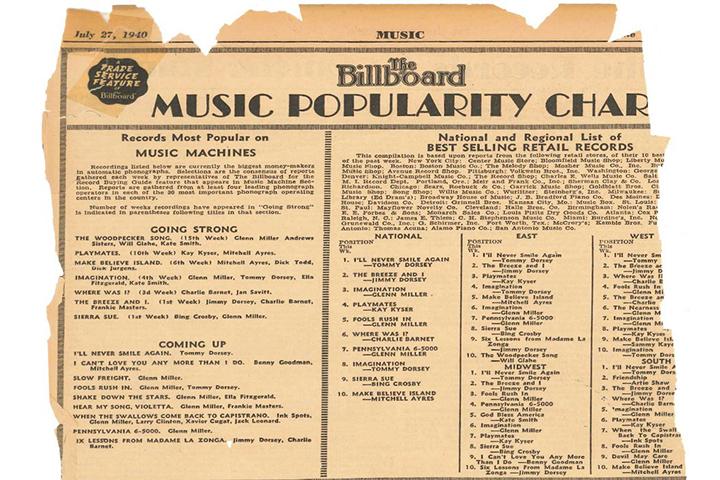 The mournful ballad was written by Canadian pianist Ruth Lowe at her home in Toronto following the sudden death of her husband of less than one year, Harold Cohen, in 1939.

“I'll never love again / I'm so in love with you / I'll never thrill again / To somebody new,” she wrote. “Within my heart / I know I will never start / To smile again / Until I smile at you.”

Lowe would later explain on the Fame and Fortune radio show: “It was a song that came from my heart, the result of great sorrow.”

Then working as a pianist at CBC Radio, Lowe agreed to let bandleader Percy Faith arrange the song for his orchestra to perform on his radio show, Music By Faith. Later, she gave a recording of that performance, along with the sheet music, to famed American bandleader Tommy Dorsey, whose orchestra was in Toronto to perform at the CNE.

Dorsey recorded the song with vocals by the Pied Pipers and a 24-year-old up-and-comer named Frank Sinatra.

“I’ll Never Smile Again” resonated as World War II was claiming the lives of young soldiers. The song not only topped the first ever Billboard chart, where it stayed for 12 weeks, but made its mark in music history as Sinatra’s first No. 1 hit.

Over the years, Lowe’s song has been recorded by dozens of artists, including Sarah Vaughan, Billie Holiday, Bobby Vinton, Doris Day, Pat Boone and Barry Manilow. Canadians who have recorded it include Louise Pitre, David Clayton-Thomas and Michael Bublé.

Lowe later co-wrote “Put Your Dreams Away (For Another Day)” for Sinatra – the last song played at his 1998 funeral.

Tom Sandler, Lowe’s son with second husband Nat Sandler, has been trying to get more recognition for his mother. "This story must be told," he told iHeartRadio.ca on Sunday, adding that he has a manuscript for a book about her life.

In an Instagram post, Sandler asks: “Why is this great Canadian women and artist not on Canada’s Walk of Fame or given an honourary Juno Award? Or have a street named after her?

Listen to music from Frank Sinatra