Severe thunderstorms moved through eastern Ontario on Saturday, leaving flooded roads in Kingston and a trail of damage at a campground in Delta, Ontario.

At 8:25 p.m. Saturday, Environment Canada said a storm capable of producing strong wind gusts, up to nickel size hail and heavy rain was moving through the Kingston, Odessa and Napanee area.

Environment Canada's Rob Kuhn tells CTV News a line of thunderstorms formed northwest of Kingston Saturday evening, stalled over the city for approximately an hour before moving on and weakening.

A Twitter video posted by Tilly Elliott showed someone swimming down Lombardy Street in Kingston.

In Delta, Ontario, approximately 120 kilometres west of Ottawa, Amy Gray shared pictures with CTV News Ottawa of damage to a campground at Lower Beverley Lake Park. "We are very lucky to have only lost our awning, with no other damage to our trailer," Gray said. Gray added some people lost their vehicles and trailers at the campsite. 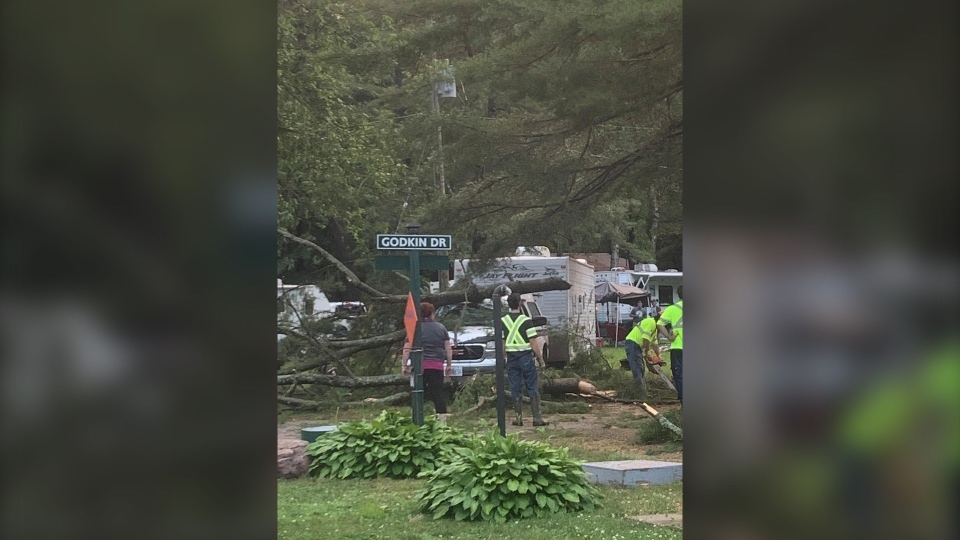 Kuhn tells CTV News Ottawa that it appears a "downburst" hit the campground early Saturday evening, with winds gusts up to 100 kilometres an hour.

Some areas may have received 10 to 15 millimetres of rain as the storm moved quickly through the region.

All weather warnings were lifted for Ottawa and eastern Ontario at 9 p.m.

-With Files from CTV News' Kimberley Johnson and Josh Pringle