NBA legend Kobe Bryant, his 13-year-old daughter and seven others were killed in a helicopter crash on a steep hillside in dense morning fog in Southern California on Sunday, his sudden death at age 41 touching off an outpouring of grief for a star whose celebrity transcended basketball.

The chopper went down in Calabasas, about 30 miles (48 kilometers) northwest of downtown Los Angeles. Authorities said that nine people were aboard the helicopter and presumed dead. Bryant, an all-time basketball great who spent his entire 20-year career with the Los Angeles Lakers, was among the victims, a person familiar with the situation told The Associated Press.

Also killed were John Altobelli, head coach of Southern California’s Orange Coast College baseball team, his wife, Keri, and daughter, Alyssa, who played on the same team as Bryant’s daughter, said his brother, Tony, who is the sports information director at the school.

Los Angeles County Sheriff Alex Villanueva would not confirm the identities of the victims Sunday afternoon pending official word from the coroner.

“God bless their souls,” Villanueva said at a news conference.

News of the charismatic superstar’s death rocketed around the sports and entertainment worlds, with many taking to Twitter to register their shock, disbelief and anguish.

Most people will remember Kobe as the magnificent athlete who inspired a whole generation of basketball players. But I will always remember him as a man who was much more than an athlete. pic.twitter.com/9EZuwk8wrV

“Words can’t describe the pain I am feeling. I loved Kobe — he was like a little brother to me,” retired NBA great Michael Jordan said. “We used to talk often, and I will miss those conversations very much. He was a fierce competitor, one of the greats of the game and a creative force.” 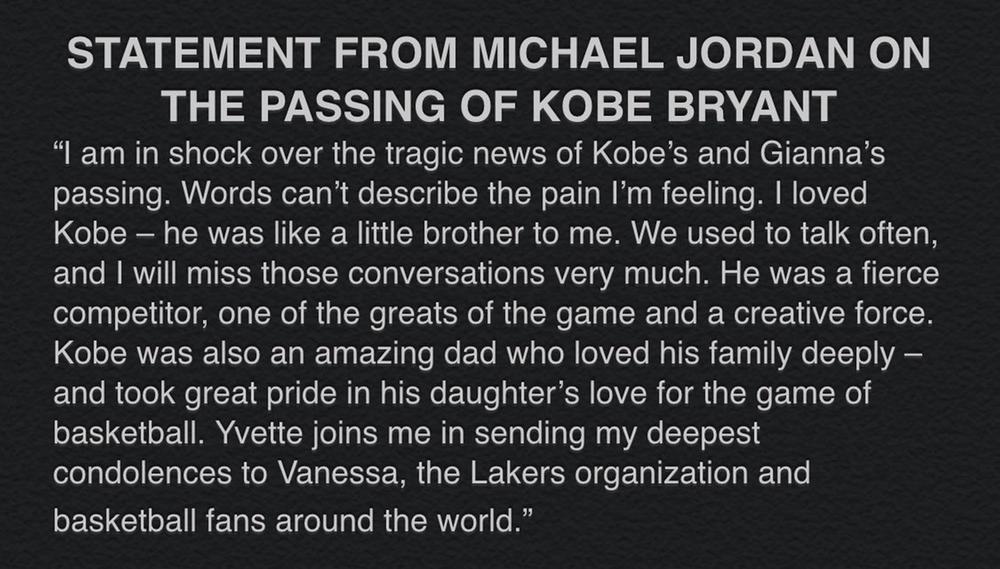 NBA players were in tears during pre-game warmups as crowds chanted “Kobe! Kobe!” Tiger Woods was unaware of the news during his final round at Torrey Pines in San Diego when he started hearing the gallery yell “Do it for Mamba,” referring to Bryant by his nickname.

Pausing to remember a great one, gone too soon. pic.twitter.com/YOAIkldiX4 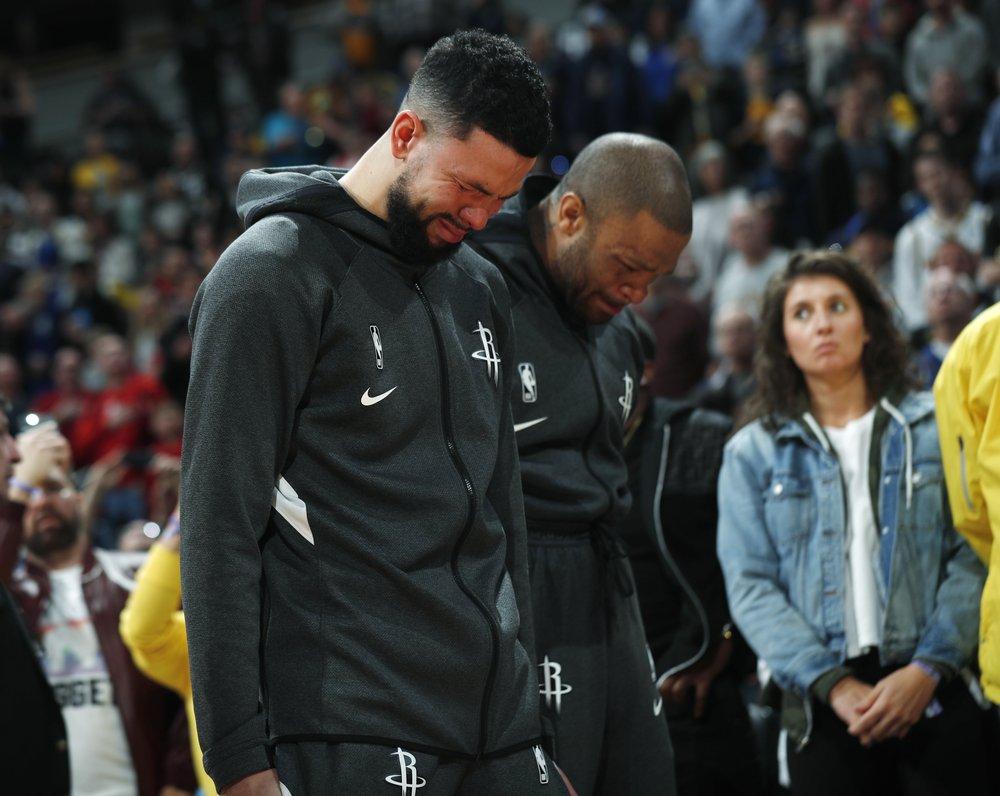 People were glued to their phones and TV screens all around the world as news of the crash spread and networks broke into programming with live coverage. A visibly shaken LeBron James wiped his eyes with tissues and walked away alone from the Lakers plane that had just landed in Southern California.

Thousands of people gathered to mourn Bryant outside the Staples Center in downtown Los Angeles, where there is a statue of the retired Lakers legend. Mourners in number 24 jerseys mixed with those in fancy dress arriving at the downtown arena for Sunday evening’s Grammy Awards.

“This is where we needed to be,” said Naveen Cheerath, 31.

Bryant retired in 2016 as the third-leading scorer in NBA history, finishing two decades with the Lakers as a prolific shot-maker with a sublime all-around game and a relentless competitive ethic. He held that spot in the league scoring ranks until Saturday night, when the Lakers’ James passed him for third place during a game in Philadelphia, Bryant’s hometown.

“Continuing to move the game forward (at)KingJames,” Bryant wrote in his last tweet. “Much respect my brother.”

Bryant had one of the greatest careers in recent NBA history and became one of the game’s most popular players as the face of the 16-time NBA champion Lakers franchise. He was the league MVP in 2008 and a two-time NBA scoring champion, and he earned 12 selections to the NBA’s All-Defensive teams. 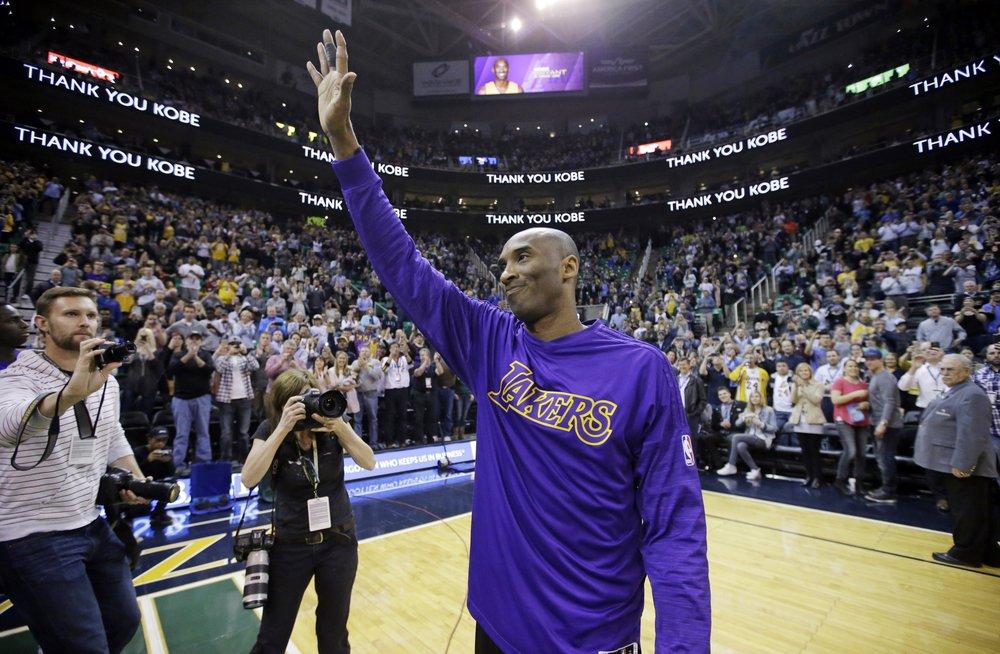 He teamed with Shaquille O’Neal in a combustible partnership to lead the Lakers to consecutive NBA titles in 2000, 2001 and 2002. He later teamed with Pau Gasol to win two more titles in 2009 and 2010.

“There’s no words to express the pain Im going through,” O’Neal tweeted. Sunday. “(at)kobebryant I love u and u will be missed. ... IM SICK RIGHT NOW.” 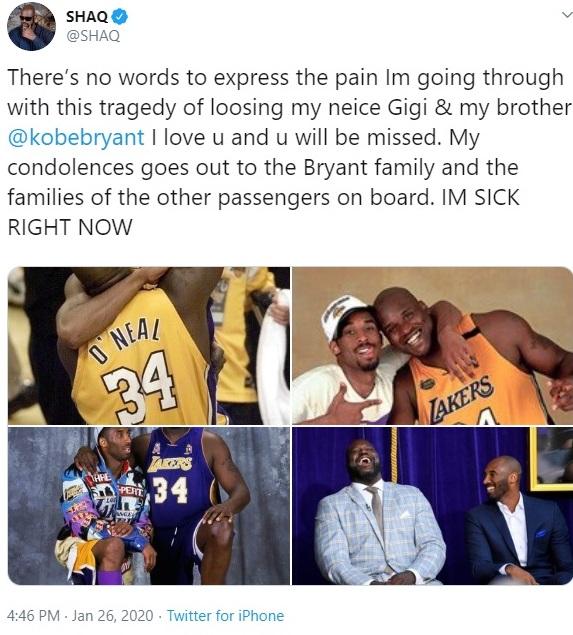 Bryant retired in 2016 after scoring 60 points in his final NBA game.

Bryant’s death was felt particularly painfully in Los Angeles, where he was unquestionably the most popular athlete and one of the city’s most beloved public figures. Hundreds of fans — many in Bryant jerseys and Lakers gear — spontaneously gathered at Staples Center and in the surrounding LA Live entertainment complex on Sunday, weeping and staring at video boards with Bryant’s image. 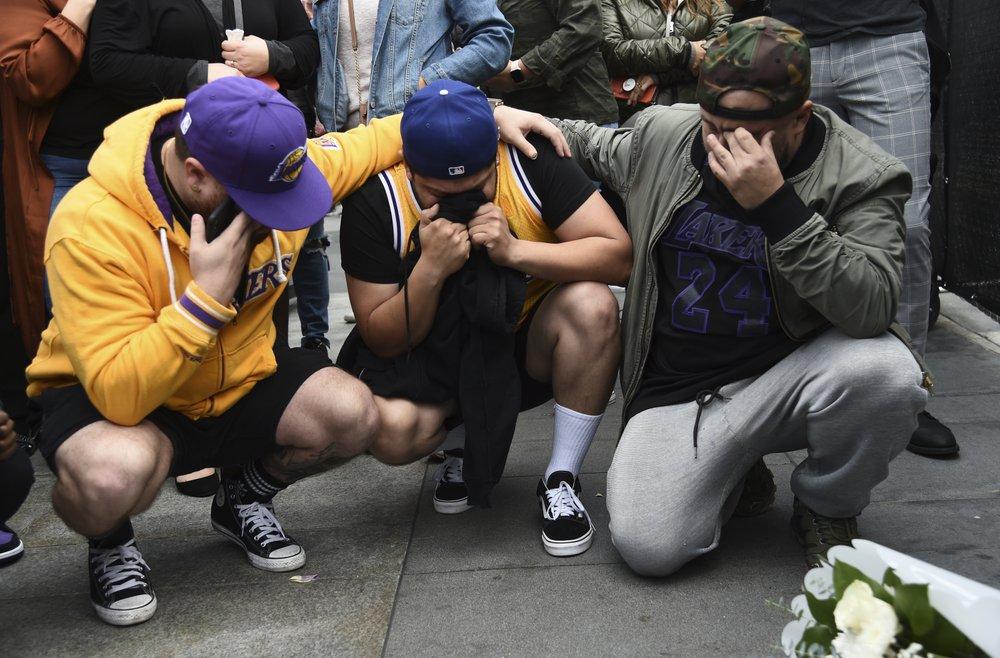 “Kobe Bryant was a giant who inspired, amazed, and thrilled people everywhere with his incomparable skill on the court — and awed us with his intellect and humility as a father, husband, creative genius, and ambassador for the game he loved. He will live forever in the heart of Los Angeles, and will be remembered through the ages as one of our greatest heroes,” Los Angeles Mayor Eric Garcetti said. 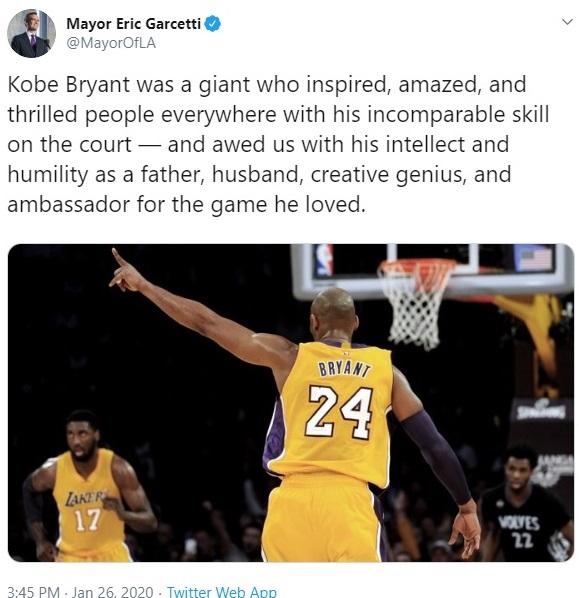 President Donald Trump tweeted condolences to Bryant’s family, saying that “despite being one of the truly great basketball players of all time, (Bryant) was just getting started in life.”

The cause of the crash was unknown. Authorities earlier said five people were killed before raising the death toll to nine.

The National Transportation Safety Board was sending a team of investigators to the site. The NTSB typically issues a preliminary report within about 10 days that will give a rough summary of what investigators have learned. A ruling on the cause can take a year or more.

Colin Storm was in his living room in Calabasas when he heard what sounded to him like a low-flying airplane or helicopter.

“Ït was very foggy so we couldn’t see anything,” he said. “But then we heard some sputtering, and then a boom.”

The fog cleared a bit, and Storm could see smoke rising from the hillside in front of his home.

Juan Bonilla of Calabasas said he was working on his roof Sunday morning when he heard a helicopter flying low nearby. He said he thought it was a sheriff’s helicopter on a training mission. He heard nothing amiss with the engine or rotors and said he did not see any mechanical issue with the chopper. It was foggy Sunday morning, but he said visibility didn’t seem to be low at the time of the crash.

Firefighters hiked in with medical equipment and hoses, and medical personnel rappelled to the site from a helicopter, but found no survivors, Los Angeles County Fire Chief Daryl Osby said.

Firefighters worked to douse flames that spread through about a quarter acre (.10 hectares) of dry brush, Osby said. 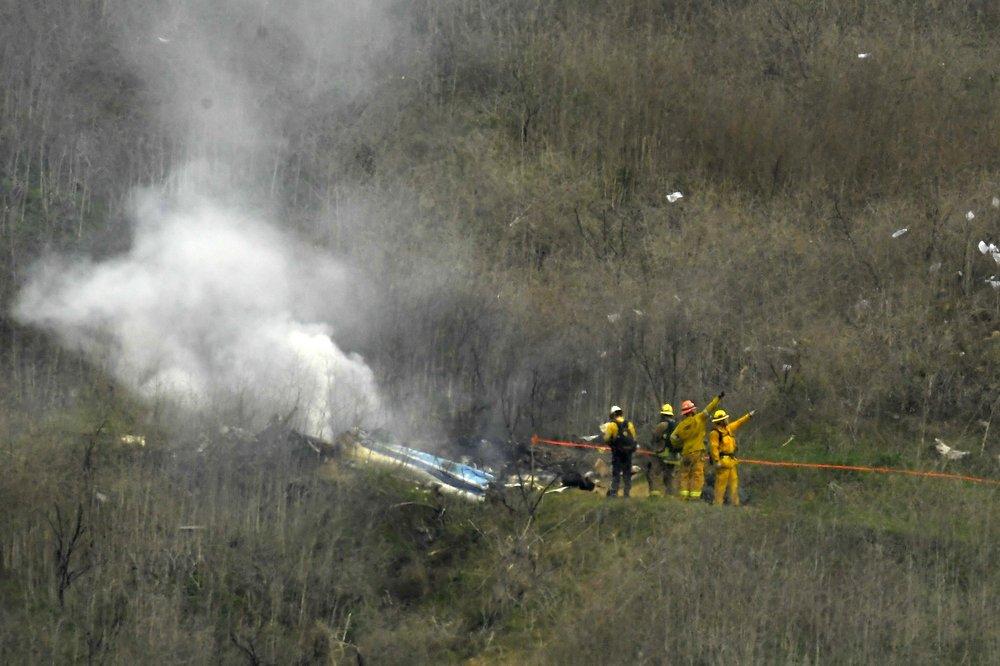 Among other things, investigators will look at the pilot’s history, the chopper’s maintenance history, and the records of its owner and operator, NTSB board member Jennifer Homendy said at a news conference.

“The S-76 is a pretty expensive, sophisticated helicopter. ... It’s certainly a quality helicopter,” said Justin Green, an aviation attorney in New York who flew helicopters in the Marine Corps.

Green believes weather may have contributed to the crash. Pilots can become disoriented in bad weather, losing track of which direction is up. Green said a pilot flying an S-76 would be instrument-rated, meaning they could fly the helicopter without relying on visual cues from outside.

Along with his work boosting women’s sports, Bryant opened a production company and entered the entertainment field in retirement. He won an Academy Award in 2018 for his contributions to “Dear Basketball,” an animated short about his relationship to the game. He also produced content for ESPN.

In 2003, Bryant was charged with attacking a 19-year-old employee at a Colorado resort. He said the two had consensual sex, and prosecutors later dropped the felony sexual assault charge against Bryant at the request of the accuser. The woman later filed a civil suit against Bryant that was settled out of court.