Concerns are being raised following news that one of the members of Ontario's COVID-19 Science Advisory Table was paid by a teachers' union for work he did during a provincial labour board hearing in September.

David Fisman, a professor of epidemiology at the Dalla Lana School of Public Health, argued against the province's plan to reopen schools.

It's something the Premier's office has called, "deeply concerning."

They say they learned about the issue through the media and, "Neither the Premier nor his cabinet were aware of this potential conflict."

However both Fisman and the Elementary Teachers' Federation argue that his work for the group was public.

In a statement, ETFO President Sam Hammond says, "In Summer 2020, the Elementary Teachers' Federation of Ontario (ETFO) retained medical and scientific experts as part of a legal proceeding."

He says Fisman, "was compensated for his involvement, which was public. The provincial government was certainly aware of the experts with whom we were working."

Fisman tells the Toronto Star his involvement with ETFO has been a matter of public record since September.

He also said in a tweet Tuesday night, "whether or not you choose to believe it, that I suggested that my work with ETFO *not* be paid. The very kind people there suggested to me that I was providing consulting that was valuable to them, on my free time, and it was appropriate for me to be paid."

He says he contacted the Advisory Table's chair and suggested he resign, "so as not to be a distraction."

Fisman says the chair did not accept his resignation and he remains in his role.

In a series of tweets on Wednesday morning, Fisman says the critism is a distraction from the government's handling of the pandemic response.

"This is not about me. It's about the Ford government having turned its back on advice that would have saved lives and saved the economy. They need to discredit those who advised a different path," he wrote in response to another tweet.

It's not clear how much Fisman was paid for his consultancy work with ETFO, but according to the Toronto Sun, medical experts have told them $400-$600 per hour is the typical rate.

Members of government tables are required to disclose conflicts of interest every six months. Since the ETFO work was done in September, it was not part of the July disclosure. 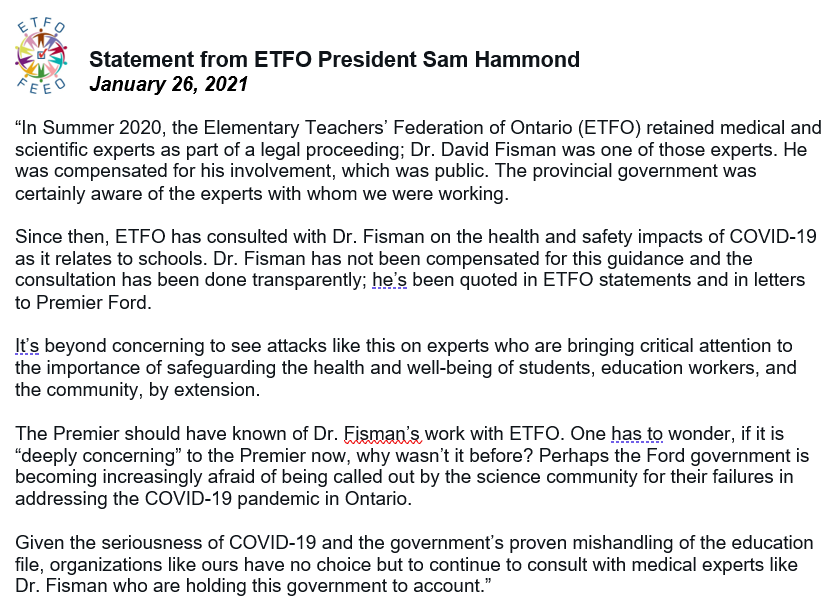 The full statement from the Premier's office reads:

“The news about Dr. Fisman is deeply concerning. Unfortunately, we learned about this matter through the media. Neither the Premier nor his cabinet were aware of this potential conflict.

Ontarians have put their trust in us to make difficult decisions based on sound, impartial public health advice. Our expectation is that anyone involved in providing advice to the government in this capacity would do so absent of agenda or bias, and therefore this paid relationship raises legitimate concerns.

While the COVID-19 Science Advisory Table is an independent voluntary group of experts that provides advice to the government on matters of critical importance, it is our expectation that all individuals act in good faith and disclose any actual or potential conflicts of interest.

The overwhelming evidence shows our government’s return to school plan is safe. This has been confirmed by a wide range of public health experts.

We will continue to work in the best interests of all Ontarians, including parents, students, and educators. By working together, we will bend this curve, and we will put an end to this virus.”