Angela Young says she's been inundated with kudos and praise for a one-minute video in which she and her two children meticulously recreate scenes from the hip-hop group's 1998 "Intergalactic'' music video.

In Young's version, the song plays as she and her six-year-old daughter Lilah and four-year-old son Levi pose and strut their way through snowy Toronto locales including Union Station, Dundas Square, the convention centre, a subway train, and the grounds surrounding the CN Tower.

Young says she shot the entire escapade in less than two hours back in November, and edited it together in about an hour. It helps that she's a professional editor and had the aid of co-workers at Unreasonable Studios, where she helps produce content for television, print and online.

She says the idea started as a themed postcard for friends and family but quickly grew into a full-on video shoot, captured with a GoPro camera. It turned out so well that a friend who saw it on Facebook encouraged her to put it on YouTube.

It was posted Tuesday and by Thursday afternoon had drawn more than 101,000 views. Young says she went into the project with "zero expectations'' but has been met with ``overwhelming positivity.''

"We're a super-creative family and we love doing stuff like this,'' Young said Thursday. "I think it's a great way to bond.''

Young said she's been making holiday postcards for seven years but this was the first to feature a companion video.

She said she would often play the original Tokyo-set music video for her kids on YouTube and said they just started mimicking the New York trio's moves while they watched.

Young said she, director Sean Mcleod and director of photography Christian Flook shot the video in slow motion, allowing them to speed the action up or down as needed. The result is a slick performance in which all three seamlessly switch moves on the beat.

Young said the original Beastie Boys video inspired her to become an editor herself.

"I was 13 when it came out and it really ignited a lot of creativity in me to want to make videos on my own,'' says Young.

"And so now 20 years later to be able to make a video like this with my own kids is mind-blowing. I just love it.'' 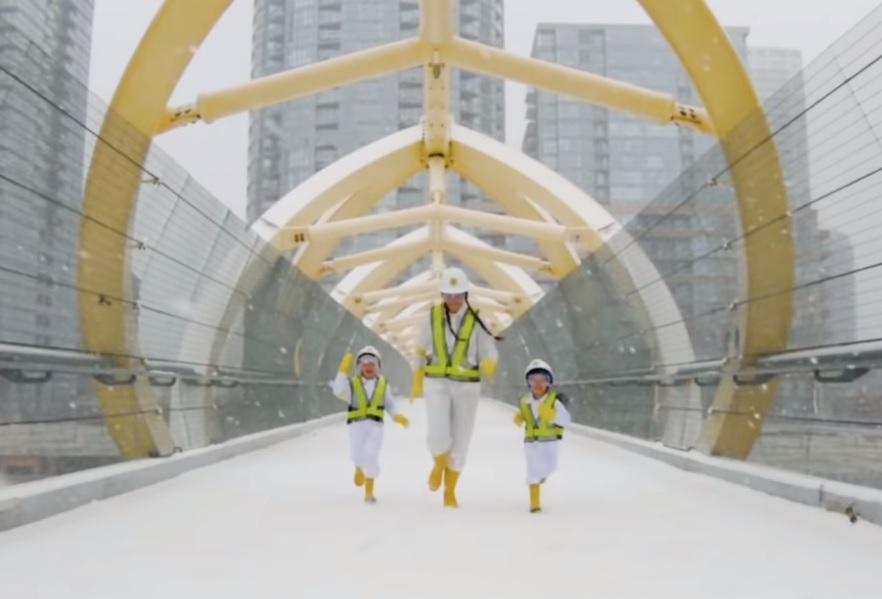