Keep the borders closed, that's what the mayors of border communities in Ontario are asking for.

The mayors have sent a letter to Prime Minister Justin Trudeau urging him to extend the closure that is set to expire July 21st.

"We just can't have them coming here, unless we've got a handle on what they're bringing with them, right now the situation in the U-S is out of control"

Redekop feels there should be more dialogue between the federal government and local border communities when it comes to a reopening plan.

"We are on the ground, we can give first hand account as to what we think should be occurring here, the mechanism to gradually reopen the border. The border will reopen, the question is when and under what circumstances."

Both the Mayors of Niagara-on-the-Lake and Niagara Falls supported the letter.

On Tuesday, the U-S surpassed more than 3 million cases of COVID-19. 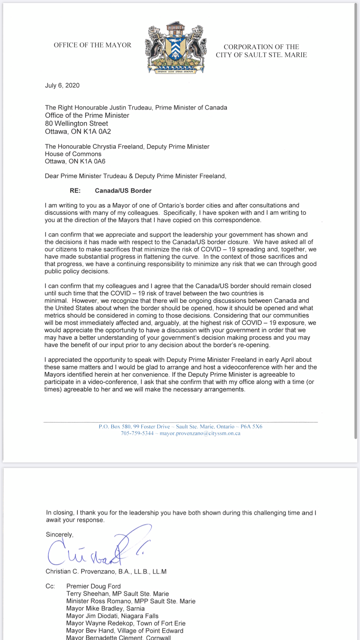