The then 24 year old had been out grocery shopping with his mother shortly before he was never heard from again.

He had told his mother, Monique Smith, that he was “tired of it all”.

Trommels was very polite and kind to everyone, but his mother says he had struggled with his mental health for 3 years prior to his disappearance.

He had been self-medicating for a while, and his mother was worried.

Smith says when she didn’t hear from him again after the weekend, she knew something was up.

Search parties checked the Fireman’s Park area where he lived, but they were never able to find anything.

She says she has always believed his disappearance was a mental health issue, and no foul play was suspected.

“The thing with ambiguous loss is that you don’t know,” Smith says.

“I can assume but I just don't know.  As humans we need to see to believe and to move on.  I feel stuck not being able to move on...How I can go from being a full time mom to an adult boy to absolutely nothing? How can you accept not being a mom any longer?” 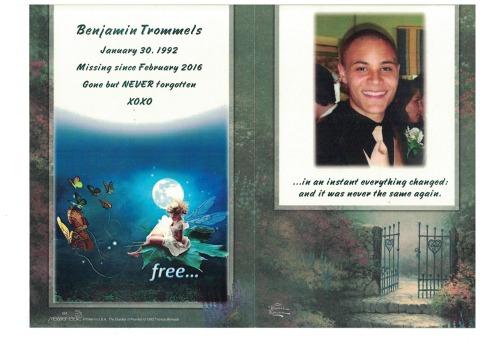 Within the last few years, many young people have gone missing in Niagara.

One of her main issues when it came to Ben was that the doctors would not relay advice to her because he was over 18, even though she was his primary caregivers.

Smith says she has become close with some of the families of the other missing youth, and speaks with Samantha Lambert’s mother, Ashley Simpson’s family, and others quite often.

She says they have been able to provide strength for each other.

“They have become my new family. They understand my pain and I understand theirs.”

Her advice to anyone dealing with loss is to take things one day at a time, sometimes one minute at a time.

“There will be ‘triggers’ that will knock you to your knees. I would like to say that time heals but it doesn’t. The first year was extremely difficult. The first of any anniversary is difficult, Second year was harder because I was struggling with disbelief that we hadn’t found him yet. This year I feel all hope is gone on him being found.”

Anyone with any information on any missing person can call Crime Stoppers at 1-800-222-TIPS or visit www.niagaratips.ca