For the second weekend in a row, Niagara reported over 50 new cases of COVID-19.

Niagara Public Health reporting 34 cases on Saturday and 21 on Sunday.

New deaths are only announced Mondays, Wednesdays and Fridays, but the current amount of local deaths associated with the virus sits at 76.

There are 236 active cases and 16 outbreaks.

Hirji says there aren't a lot of changes that will impact businesses, except for limiting dining to 6 people per table and collecting all information from each person instead of just one.

Hirji says cases are continuing to rise across Ontario and here in Niagara, and he says we are 'headed in the wrong direction.'

"The big thing we are seeing is that people are having lots of social interactions, which is a normal part of human activity, but unfortunately it's something that is causing the spread of infection right now. We really need to limit ourselves in doing that so we can help bring COVID-19 under control."

He is hoping residents in Niagara will now limit contacts to their own households to stop the spread of the virus, even asking people to avoid social contact with co-workers.

There are three people hospitalized with the virus in Niagara currently.

Hirji says the reason we don't have a higher number of patients admitted is because the virus is mainly circulating among young people, but that will eventually reach an older population, which will lead to more people in hospital and more deaths.

He brought up a recent 'super spreader' event which involved young adults getting together in Niagara in private homes and bars.

Over 40 cases resulted from the event, involving 8 other municipalities.

Hirj says the group of people, with an average age of 24, met early last month and did not follow public health advice to physically distance and wear a mask.

The group then spread the virus at 41 bars and restaurants, 23 retail stores, 2 long-term care homes, 12 family homes, and 17 sports and recreation teams.

Over 100 ''exposure locations' have since been identified.

Hirji would like to see enforcement stepped up to break up large social gatherings within homes, and even look at visiting businesses to educate employees.

Ontario is reporting another record high in daily COVID-19 cases, with 1,328 new infections in the past 24 hours.

According to Dr. Hirji, Niagara is very close to be moving into the 'orange' level of Ontario's colour-coded system, saying the region is already maxed out when it comes to contact tracing. 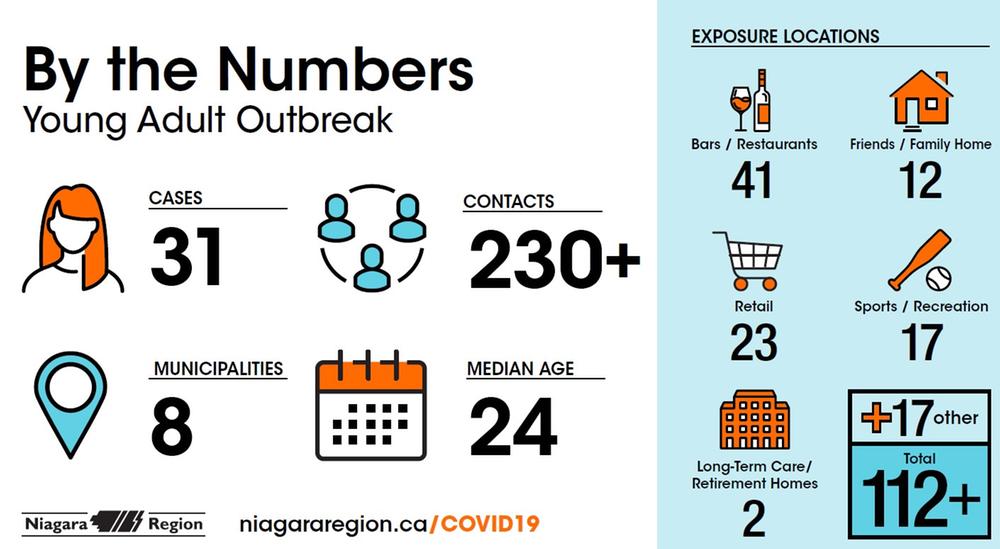