Police Chief Craig Ambrose along with Mayor Ian Boddy both took a knee at the Black History Cairn - the place where the city honours its deep heritage as the northern most terminus of the Underground Railroad.

Also in attendance was Rebecca Ironmonger and her daughter Scarlette - 9th and 10th generation descendents of one of those families who arrived here after escaping slavery in America.

Chief Ambrose said he believes there's a misconception about police pointing to the local service as being very involved in the entire community.

"Its important to denounce what's happening in the States and support what's going on here and build relationships in our communities".

He says he's seen portions of the George Floyd video in which a police officer kneels on his neck for more than 8 minutes before he dies of asphyxiation.

Ambrose says its disgusting and certainly not something they'd ever be trained in in this country for a situation like that.

"I can't understand what that person was thinking."

Mayor Ian Boddy says he was approached by members of the local black community about doing something to show solidarity with protestors in the States and all of them decided to rule out any kind of distance walk or rally due to the current restrictions of Covid-19.

"Because we can't have more than five people together at the same time, what I'd really like to have is the community come out to the cairn if they can and take a knee; take a photo and post it to social media so we can have a rally, one at a time.  And if you can't come down here ... do it at home.  Take a knee and show where you stand on this and show the rest of the world what kind of a community we are in Owen Sound."

Boddy says looking back over the past year and incidents of hate with the mosque and white supremacist stickers, he says we recognize we're not perfect in Owen Sound but at the same time we do have a great heritage with the northern terminus of the Underground Railroad which is important in our heritage.

He says they wanted to do something that recognized what's going on in the States while at the same time acknowledging that we've still got a long way to go here.

Fighting back emotions at times, Rebecca Ironmonger reacted to the images coming from south of the border.

She calls it terrifying - how explosive it is; how leadership is encouraging and allowing it.

Ironmonger says she might not look like a minority but she holds solidarity and wants to bring awareness and demonstrate that she sees what's going on and wants better for this community, the community down south and for humanity.

She admits she hasn't been able to watch the horrific video of George Floyd dying under a police officers knee.

"I don't feel I need that in my head space.  I know its a truth and we don't actually have to see it to do something about it.  I find it very hard to watch especially with my daughter at home right now.  She's terrified and asking a lot of questions and we need to have good answers for her that promote the morals and ethics and values that her school and our community boast about." 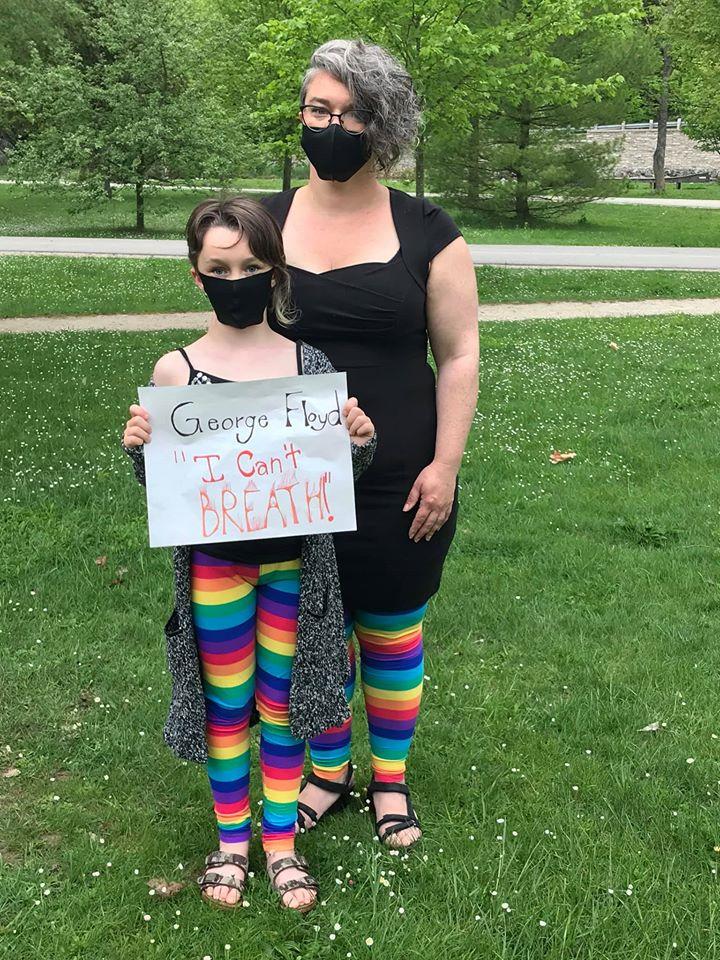 Ironmonger says it was an honour to be at the cairn this morning and she found it incredibly moving to have people show up to hear the message and willing to spread the positive.

She likes the idea of encouraging people to visit the cairn and take a knee, one at a time.

"We can create some serious momentum while keeping everyone safe from riots and Covid and people can have their own emotional process without it being condemned or inflamed".