Scruff Connors has passed away.

Scruff was our morning man from 1987 to 1991. Although we were already winning industry awards, Scruff was instrumental at putting HTZ-FM on the map.

The radio waves have been filled with all sorts of funny people behind the mic, but Scruff was truly one of Canadian radio’s first great wild man, on and off the air. He was totally unpredictable. With Scruff … there was CHAOS!   He was a sweet guy who definitely knew how to exploit the double entendre and push it past it’s limits… but it wasn't with malice and he did it with grin and twinkle in his eye.  The pranks, the gags, the stunts, the stories (to follow) were legendary for their time.

Eric Samuels, HTZ’s first Program Director and afternoon drive announcer, had to “manage” Scruff. It was like working with a keg of dynamite. On his Facebook post, he explains what made Scruff so special:

Scruff had a razor-sharp creative mind and was fearless, particularly when on the phone when his calls were, almost always, live (not recorded/edited)! His show was the only one in my nearly 30-years in the business where I literally delayed heading into the shower in the morning for fear of missing something great.

And keep in mind this was the mid-80s before Howard Stern had made it on a national level. Scruff was blazing his own path and was never a copy of anyone else, in radio, or any other medium.

Yes. Fearless….and FUN. In his first week at HTZ he pitched a tent on front lawn of the Whitehouse of Rock in protest of his new contract with the station. “They promised me a house with a view of the lake and they gave me a house on Lake Street.” For one week he lived in front lawn of the station, the scene of all day-all night partying and a magnet for the biggest bunch of freaks we’d ever seen. After a week, we had to shut it down or Scruff would have died! In Toronto, he had become a legend on Toronto rock radio. He played every card. Coming to HTZ was like sitting down at a new table with a fresh deck. 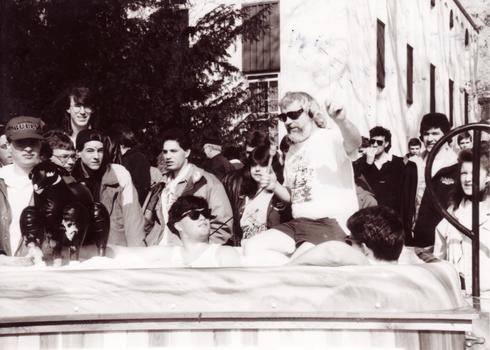 Scruff once gave away a chances for listeners to have a Thanksgiving dinner on the “good ship Mayflower”, leading everyone to believe it was one of those tall ship dining experiences out on Lake Ontario. Instead it was in an 18 wheel Mayflower moving truck parked beside the radio station in the park. Scruff was good on his promise: two sittings, a table that ran down the full length of the truck with white linen, silverware, candles and fully catered turkey dinner with all the fixin’s. Keep in mind this was at 7 & 9am in the morning.

Food was phallic for Scruff. Beat the Baloney was a carry-over from his days on the air in the Toronto: which later made way for Wheel of Meat - a game show where Scruff would give everything from steaks to head cheese.

Scruff worked his magic on the phones and could talk his way past any wall of security to talk to the celebrities that dominated the entertainment news. He terrorized Harold Ballard’s wife Yolanda, courted Tammy Faye Baker and talked his way into more than a couple of free flyaway trips to the Superbowl on NFL’s dime. Let’s not forget about Matilda Washington of Buffalo, “Honk On Bobo” with the Good Brothers & Uncle Smokey’s “Bear Song”. He became pals with St. Catharines’s mayor Joe McCaffery, helped him get re-elected and was later appointed to some hydro commission. 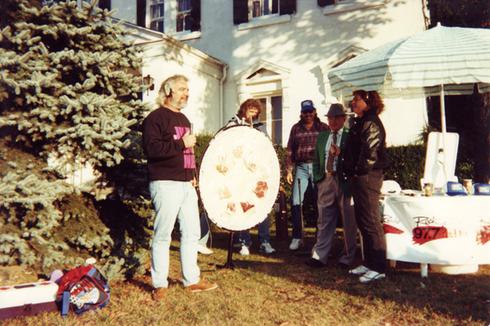 Most of Scruff’s most memorable stuff was made up on the spur of the moment. He was one to not ask permission and beg for forgiveness afterwards.

The New Kids On The Block

One day Scruff opens up the newspaper to read a story about the mania surrounding the New Kids On The Block’s appearance in Ottawa the night before. Scruff opens the mic and declares, “Tomorrow, good listenership, the New Kids are coming to HTZ-FM. They be here at 8:30. The New Kids will be here in the studio with me, live on the air at HTZ-FM”!! This went on allllll morning.

The next morning, over a hundred girls, some with their mothers, packed the front lawn in front of the radio station. They brought signs, sang songs and waited for 8:30. They were excited because the New Kids were coming!!! At precisely 8:30, two stretch limos pulled up in front of the radio station and the girls rushed the cars. The fully uniformed limo drivers emerged, opened the doors and out stepped 5 women and their new born babies. The “New Kids” were here. Scruff knew how gullible people could be.

There was dead silence as these women walked their way through the crowd and into the station and onto the air with Scruff as he had promised. Outside, the girls and mothers turned on us and shouted obscenities unbecoming of such fine women. They issued threats. Behind the doors, we were roaring.

On one morning, there was a story in the morning paper about Portage, a small town in Pennsylvania. The town’s only police cruiser was out of commission so the police had to patrol the town in municipality’s garbage truck. Scruff hit the mic and asked the “good listenership” to help out this small town and this small humiliation. Raising the money was no easy task at a time when our economy was in a tailspin but he did it. He picked up the fully equipped cruiser, tore down the interstate toward Pennsylvania, pulled over some unsuspecting drivers and rode into town,  expecting a hero’s welcome, only to find that the townspeople were a little put-off and humiliated. Still, the mayor appreciated the generous donation and presented Scruff with the keys to the city. Little did we know this we be the beginning of political career for Scruff. 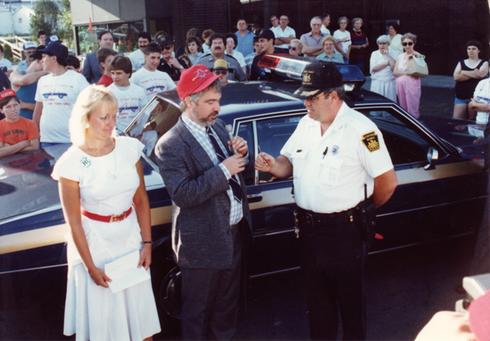 HTZ-FM was only one of several stops for Scruff. First at Q107, then HTZ and then at CFBR - The Bear in Edmonton and somewhere in this journey was a stint at a major record company. There were tough times along the way but he always left the listeners and his fans laughing. Although many of today’s crazy jocks  & pranksters behind the mic have may have never have heard of him,  they have no idea how important he was and are indebted to him. It can’t be overstated how important was to HTZ-FM. He was a major player in our “HTZtory”.

As a bonus, here’s some audio clips including the b-side of an aircheck tape of fairly low-key but fun show. Scruff’s partners on the air at the time were Joe “Carrots” Cahill, producer Pat “Batty” Zulinov and Shiona Thompson in news. Special shout-out to Marilyn Stevens who co-hosted and suffered Scruff for 3 years.