April Fool’s is usually a day full of pranks and ridiculous Internet links that lead to Rick Astley videos on YouTube. However, this year I think our whole collective society is in agreement; we don’t need any more jokes. That isn’t to say we don’t need a laugh, but in the world’s current climate, I think the last thing we need to read is how there’s a toilet paper shortage or that Disney is buying the white house, or whatever else the Internet can dream up. So I figured I would share a story that most people in my life thought was an April Fool’s prank but in fact was 100% real.

The date was April 1, 2013. After some time off, a mediocre trilogy of albums (which I still say there was enough material for one REALLY GOOD album in there but anyways), one drug and drink fueled rant followed by a guitar smash on the iHeart Radio stage and rehab stint later… it was time for Green Day to take the 99 Revolutions tour to Rochester, New York. I was supposed to be away at uOttawa studying journalism and the Rochester show was originally the only weekend date close by. The tour got delayed and I dropped out to pursue music. A week or so prior to the show, I had an audition to get into Metalworks Institute, to study Guitar and Music Production and had chosen to perform a Green Day song.  I picked Letterbomb, one of my favourite tracks from American Idiot. It’s not the most technical guitar song but it’s a lot of fun to play. When I say that I knew that song like the back of my hand, I mean I knew it; Eyes closed, ears covered, underwater, whatever way I needed to play it, I knew it. Which meant it’d be the perfect song to go on stage to play with the band.

The night before the Rochester show, I made a sign on bright green bristol board that read “CAN I PLAY LETTERBOMB?” and I posted it on Instagram with a picture of my guitar. I tagged the band in hopes of a reply. Nothing, no likes, no response, nothing… “Well that’s okay” I thought. Two of my best friends who were supposed to come to the show with me bailed, so I ended up selling the extra tickets to a grade school friend. I picked her and her friend up at 11am, April 1st. I knew I had to be near the front if I was going to be able to get on stage. Except Green Day fans are passionate… By the time we got there, at least 75 people were already in line. The person at the front of the general admission line literally camped at the front over night… And I felt my chances slipping away.

We waited another 5 or so hours in the cold and flurries. My anticipation was rising… And then the security came through the line before the show. “No posters on the floor”, he said sternly pointing at my sign. But being the little rebel I was, I folded that thing about 17 times and somehow made it pocket sized. When they gave me the pat down at the front, security asked me “What is this?” grabbing the large square shaped object in my pocket… “Uhh, it’s my wallet?” Somehow that fooled him, and I had gotten my contraband sign onto the floor. When Green Day took the stage, I found myself in the pit about 5 rows of people from the stage.

Now the whole show was kind of a blur, I want to say about 7 songs into the set, Billie Joe started slamming into the E chord that starts Letterbomb. That was my cue. I carefully unfolded it while dodging elbows from fellow moshers. The band ripped through the first minute or so of the song before they reached this instrumental break after the first chorus. Billie Joe began pacing the stage yelling at everyone to “stand up” and ranting about being alive. All the while, I was riding the wave as people pushed and punched their way around the floor. People behind me started tapping my shoulder and to put my sign down, but I didn’t come all this way, dodge security and moshers, just to give up while they were playing the song.

Then suddenly I heard “HEY, you, with the sign, what’s your name?”. Billie Joe was pointing at me!

“Jonathon” I screamed as loud as I could, as if I was somehow going to be louder than the arena PA system that the band was currently playing through. And then, with the next sentence, my life was changed forever.

“Do you want to come up on stage? I can’t hear you”. And the next thing I knew, security was helping me jump the barrier at the front and I leapt on stage in a single bound. I immediately hugged my idol. And then things are kind of a blur. Based on the YouTube footage and my own blurred memory, Billie asks if I know the song, I just nodded, “You swear to god?” he asks again, “Yes”. The next thing I knew, Billie Joe was putting his guitar over me, and handing me a pick. He pointed to the volume knob, which was cranked down. He said, “When I give you the signal, crank that” then he launched into a series “Hey Ohhhh’s” with the crowd. He dragged me back to the drum riser and we sat there for a moment and listened to the crowd. I couldn’t come up with any words to say to him other than “One day I’m going to open for you guys”. He chuckled and put his arm around me and asked if I was ready… Of course, I’d only been dreaming of this for years. I was ready. 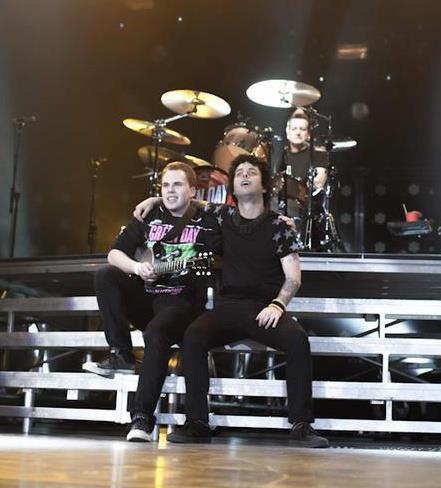 “Where will all the Martyrs go when the virus cures itself? And where will we all go when it’s too late?” he sang in silence, before the band and I launched back into the song.

That’s when the wheels almost came flying off… If you don’t know the song Letterbomb, technically it’s not the hardest song on guitar, but there are a lot of chord changes and it can be easy to get lost, especially when you’re playing with your favourite band, in front of a crowd bigger than all the shows you've ever played, combined. I nailed the first chord, came in, on time, everything was good… but then, I made the mistake of playing the verse pattern instead of the chorus pattern, or maybe it was the other way? Either way, the next chord I played was wrong, not even close in fact. Now, in real time it was probably a 2 second flub, hardly noticeable to the average fan. But I knew what I did, and even worse Billie Joe knew it too. He ran over to me, grabbed my hand and moved it to the right chord and then the next after that. Then I waved him off with a head nod, somehow conveying “I got this”, and he must have picked it up because by the time I launched into the guitar solo, he was back up front, conducting the crazy fans like they were an orchestra. I never looked back.

I plowed through the rest of the song, looking up briefly to see Mike Dirnt ripping bass to my left, feeling Tre Cool’s thunderous drums behind me. But I was so focused, I could hardly move. I couldn’t make another mistake, and I wasn’t going to. That’s when Billie grabbed me by the collar and dragged me to the edge of the stage, demonstrating to me some proper lead guitar antics like putting up my foot on the front monitor and I ran with it. I whipped the neck of the guitar up in the air like I was activating Star Power in the most realistic game of Guitar Hero ever. I even sang the last verse with Billie Joe, sharing the mic so closely; I thought he might knock my teeth out with it. 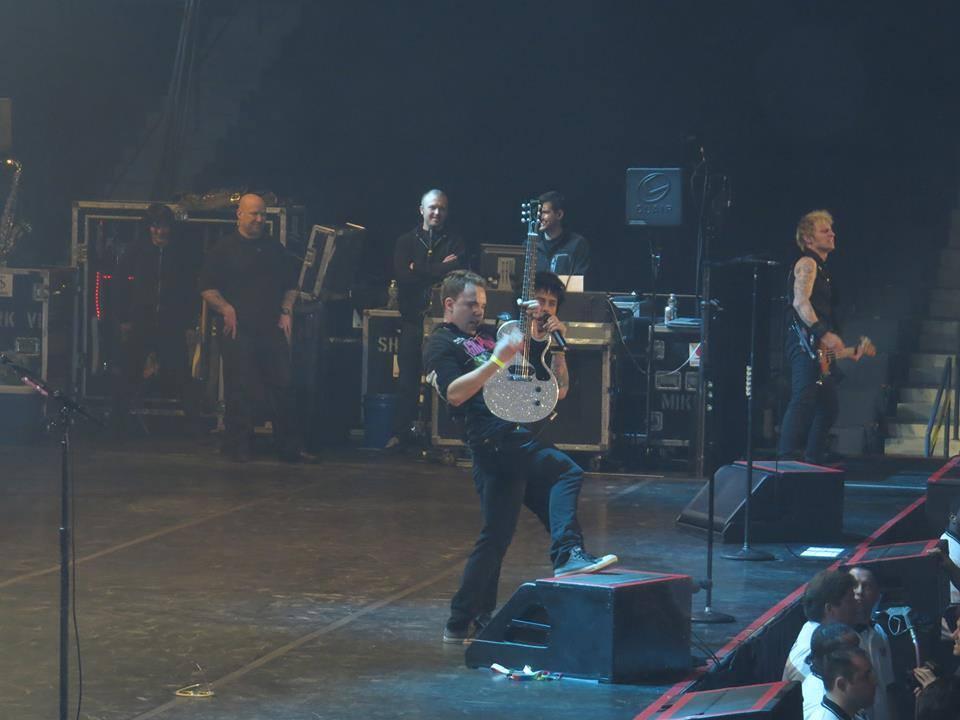 Like every dream, you eventually have to wake up. I came to as the last chord was ringing out. Billie quickly grabbed the guitar back from me and encouraged me to stage dive. Look, I don’t know if you have ever stage dove at a Green Day concert before, but it can be tricky. You’re six feet in the air, and have to clear about a three-foot gap to get to the crowd. Then you have to pray that the teenagers in hot topic skinny jeans with spacers and mall quality piercings are willing to catch you. Oh did, I mention my vertical is about 3 inches off the ground? But if Billie Joe says I have to jump, I’m going do it! And I did. And despite my fear that it would look something like Jack Black’s dive at the beginning of “School of Rock”, the crowd caught me. And for the rest of the 2 hours in the set, I was in a daze. People coming up to me, saying great job, giving me hugs, saying how awesome that was. During the encore, I even slow danced with some blonde girl who was in the pit with me during the song “Brutal Love”, don’t ask me her name because I don’t think I ever got it, (talk about missed connections, right?). Anyways, I made the trek back with my concert mates and posted a picture online of the Green Day branded guitar pick sometime after midnight with the caption “Playing with you guys was just incredible”.

The next day I awoke to likes, comments and messages asking if this was some kind of April Fool’s joke. People from my high school and university couldn’t believe it, they knew I was obsessed with Green Day, but never thought I’d actually get to play with them. I must have pulled off some elaborate prank. Thankfully people filmed the whole thing and put it on YouTube the next day so I have proof. To this day, I can’t even believe it happened. I was even in the paper! It was easily the greatest night of my life, and something I’m never going to forget. So on this rather unfoolish, April Fool’s, that’s the story of the greatest April Fools prank I never pulled.