It all started with a simple question: “What’s the greatest Canadian rock band of all time?” It’s a question I’m sure many of us have debated, probably around a fire with a cold one in our hand during a long weekend. I have a story to tell about such a debate, and it took place on the most holy of battlegrounds... Twitter. After the question was proposed by Canadian music publication Exclaim! the replies on the tweet immediately filled up with responses. From Canadian Rock Radio staples like The Tragically Hip, and Sloan, to the indie darlings, and underground champions like The Constantines and The Weakerthans, the replies read like a who’s who of Can-Con awesomeness.

My reply? “Rush. Next” I wrote, as if the question required little to no thought in the slightest. For me, it really was that simple. No Canadian band has had the combination of longevity, success, influence, and worldwide reach that Rush has had. And for the most part, people agreed with me.  However, one twitter user (who I will leave nameless) wrote back to me:

The spelling and grammar this person used was top notch so I had to make sure I quoted the tweets as is. Bad grammar online, it’s to be expected, but that take? I was flabbergasted. I expected fans of The Hip to come at me, or maybe even hipsters to talk about some 90’s band that never gets enough love, but a hand up for Nickelback... I couldn’t believe it. Okay, now before you think this is a poop all over Nickelback party, it’s not. I’m not a fan, but I would have to be an idiot to demean the success of Nickelback. They can write a hit, not just for themselves either. Chad Kroeger has done quite well writing for other artists and producing songs and albums. It’s ignorant to not give Nickeback their due. 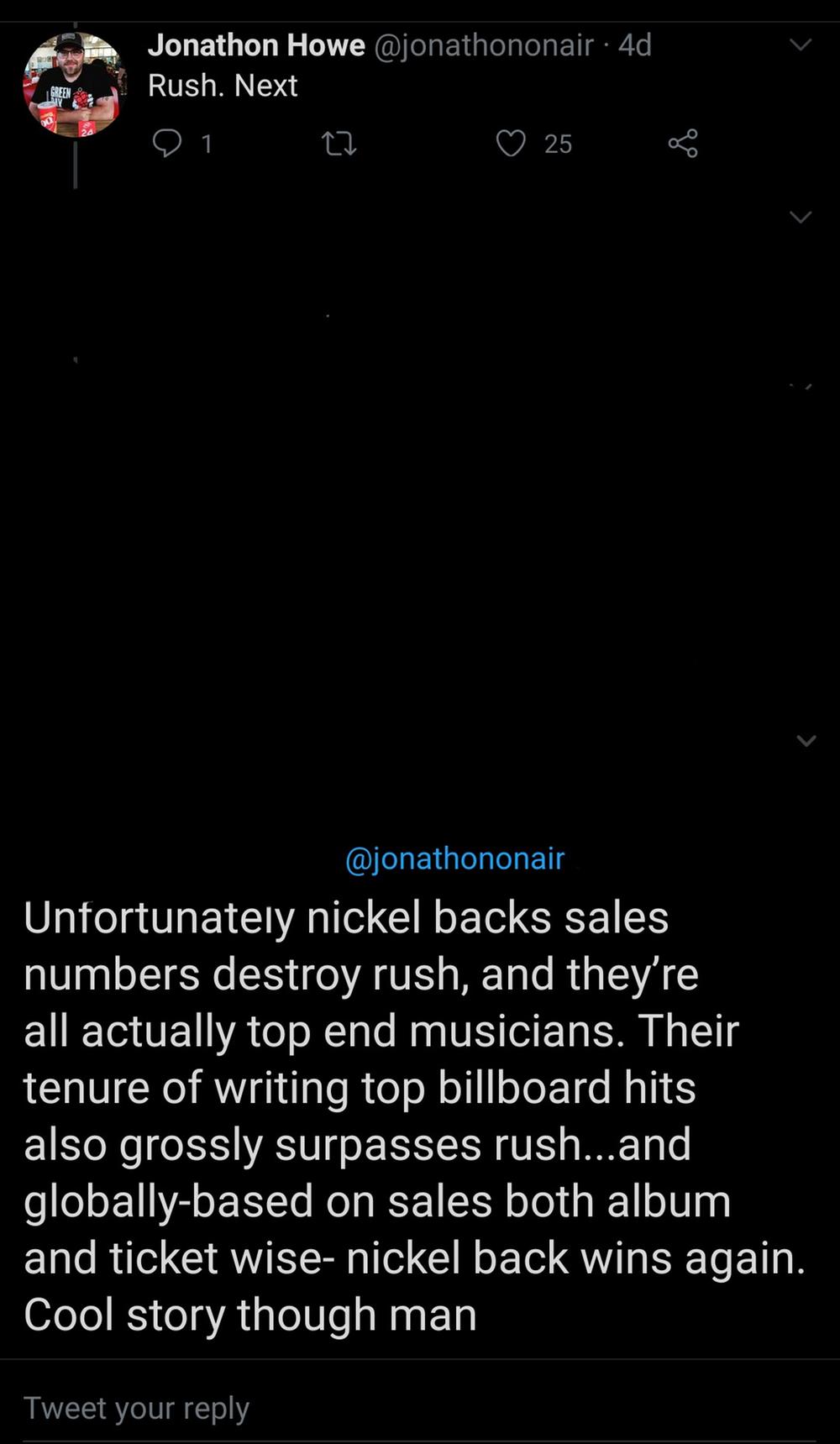 HOWEVER, how in the ghost of Gord Downie are you going to tell me Nickelback is the greatest Canadian “Rock Band” ever? Most of the time, I stay away from arguing about anything online, because for the most part, it really accomplishes nothing and makes everyone involved just look silly. This though, this travesty, I couldn’t let it go. I dove into the numbers. Nickelback’s sales are pretty strong, but Rush are no slouches either. Rush have 24 Gold records and 14 platinum in the United States. Only The Beatles, The Rolling Stones, Kiss and Aerosmith have more. Rush have sold approximately 40 million records worldwide, not too shabby, Nickelback are at 50 million give or take worldwide. So to say that Nickeback destroys Rush’s albums sales, is a bit of an exaggeration.

This particular tweeter went on to respond with such outlandish comments as “any artist that manufactures in layer upon layer of 97 guitars, chellos, jazz flutes, etc etc etc are just convoluting their message and furthering white noise.” And “The fact that nickel back opened Canadian rock music to major labels. Rush is a niche band. Nickel back sells to masses.” What masses? The ones who are constantly sharing memes about how bad they are? Layering music is apart of every genre of music. Heck even the Sex Pistols had something like 26 guitar over dubs on God Save the Queen. I am sure if we talk to Nickelback’s producers, they’ve layered and used overdubs just as much as anyone. Rush just chooses to broaden their sound scape with synths and percussion, but to my knowledge… I’m not sure I’ve ever heard a “jazz flute” on any of their records. 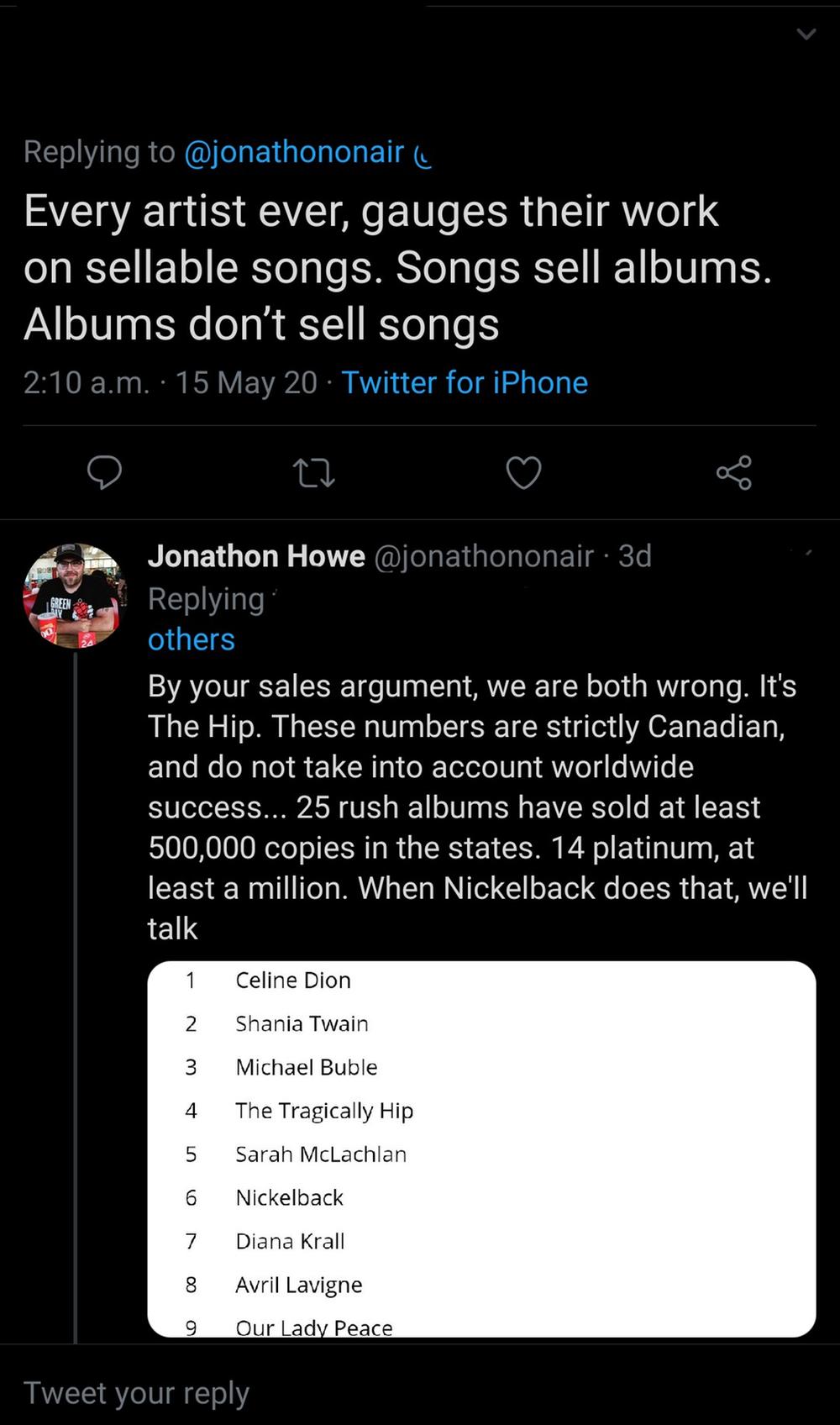 Other gems this person threw out include “Geddy Lee is the worst technical vocalist that has ever played lol” and “There’s a reason rush didn’t hire a proper singer. It’s unsingable music man. It suits a dying banshee screaming in flats and off keys, but put a world class singer in and they’d walk off stage”. Look Geddy’s voice isn’t for everybody. But anyone who sings “in flats and off keys” would not have a record deal. Or sell 40 million albums. Or be a part of a band that many think of as one of the best live acts of all time. It just doesn’t happen. This tweeter wasn’t done there.

When I point out that personally, I find the lyrics of Nickelback to be surface level and trivial, they responded with “None of us actually know what 90% of his lyrics actually mean. So to classify them trivial silly. As a writer, I’m sure you get my point. Me writing the word ‘love’ into a song might actually mean smoking meth”. Now, I don’t know much about smoking meth, but if the word ‘love’ is code for smoking meth than there are a lot more songs about drugs than I thought out there.

This back and forth continued into the wee hours of the night, countless other bone headed comments came from this guy about how The Beatles weren’t good musicians, individual songs were more important than whole albums, and other outlandish takes about music. Then this guy drops the king daddy topper of tweets; “I’ve seen Rush live 4 times.” Wait. What? He just spent the last hour crapping all over Geddy’s vocals and telling me that they don’t write good songs? Then why would you spend hundreds of dollars to go see them? My brain broke.

At this point, I truly realized I was fighting an uphill battle that I no chance of winning. It was 3:30 in the morning, and I just had to let this father of two from Alberta wearing a Canadian Tuxedo in his avatar who claimed to be a professional vocalist be. He wasn’t budging him and there was no changing his mind no matter how many holes I poked in his argument. Rush will always be an important band to me, and their influence reaches far beyond the great white north. Ask members of Metallica, Rage Against The Machine, Smashing Pumpkins or the Foo Fighters for their thoughts on the importance of Rush, and they’ll go on for hours. Like they all did in the documentary, Rush: Beyond The Lighted Stage.  But I could be the one who’s wrong. 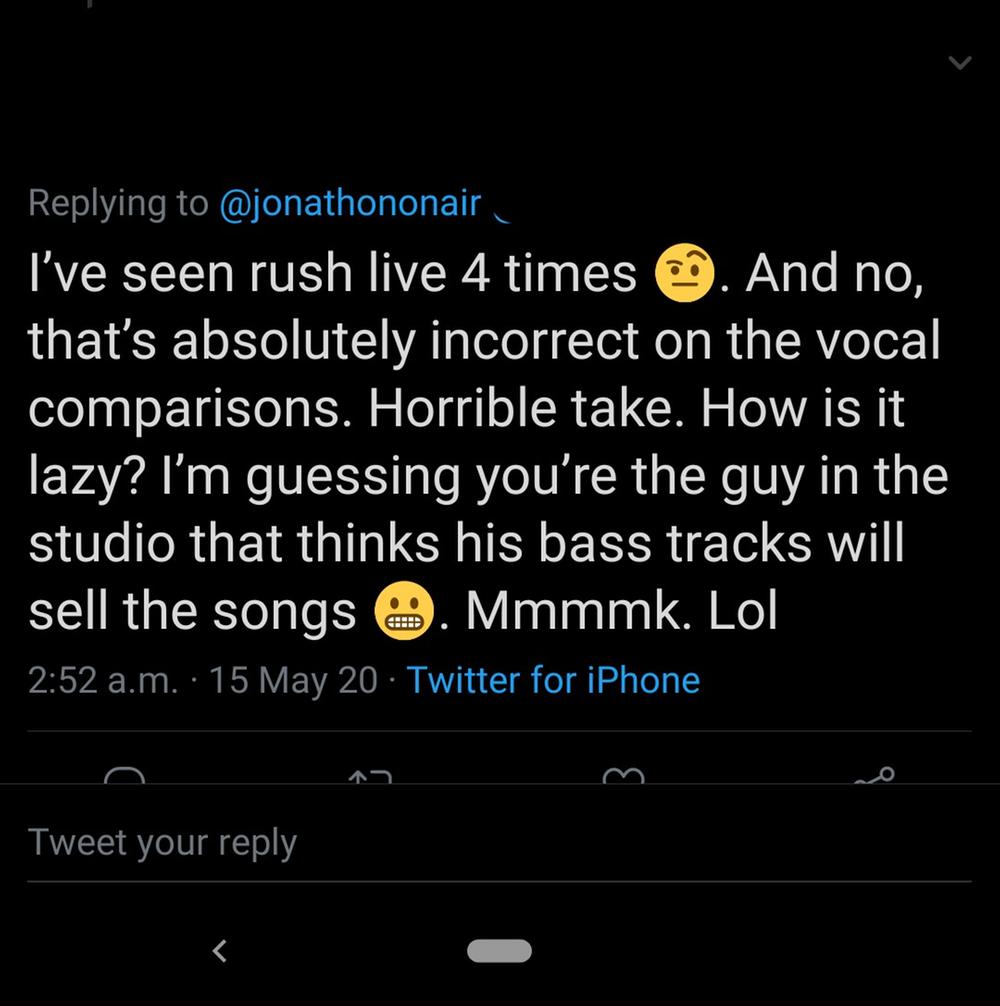 Maybe, when it’s all said and done, and Nickelback has wrapped their 40th anniversary tour and said their farewells, they’ll be the subjects of a documentary. Maybe there will be radio host’s in their mid 20’s fighting online with Dad’s about Nickelback’s status as Canada’s Best Rock Band of all time. Maybe one day, the hordes of closeted Nickeback fans will rise up and unite to form their own conventions in honour of their favourite band the way Rush fans have.

Or maybe, they’ll all just agree to crack open another beer, throw a log on the fire, and play The Tragically Hip fireside, like Canadian’s across the country have done every Victoria Day weekend since the late 90’s. They may not be the biggest band in the world, but they’ll always be our band. Cheers, to May Two Four, the unofficial start to summer in Canada, and to all the great Rock that the Great White North has to offer.