The Clerke Rd wildfire north of Kekuli Bay Provincial Park is being held at 43 hectares. No growth on the fire overnight.

Based upon the recommendation from the BC Wildfire Service, the Regional District of North Okanagan has rescinded the evacuation alert for properties in Electoral Area “B” on Kalamalka Lakeview Drive, Highridge Road, and one property on Highway 97. The District of Coldstream is also rescinding its Evacuation Alert for Clerke Road, Coldstream.

“Crews have worked tirelessly to achieve this result, and we sincerely thank them for working throughout the night and today to control such a fast-moving fire,” said Ashley Gregerson, RDNO EOC Information Officer.

"10 personnel will be on site today with air support as necessary."

The Alert was implemented due to a fast moving fire on the west side of Kalamalka Lake along Highway 97 that was first reported on Friday evening. Firefighters and emergency personnel worked throughout the night to contain the fire, and thanks to their hard work, no structure damage or injuries were reported.

The latest update from BC Wildfire shows the Clerke Road wildfire is currently being held at 43 hectares. Personnel remain on scene but the Vernon Fire department has taken over jurisdiction.

The evacuation order has been rescinded but properties remain on alert.

Kelowna resident Tommy Bridge posted in Vernon's Rant and Rave Facebook page saying he was the first person on scene:

"Hey Vernon residents.. this fire was started by a tossed cigarette. I was the first person on scene as I was returning to Kelowna I saw the fire on the side of the road which was only 5 feet wide at that point.

I immediately jumped out of my truck and grabbed my fire extinguisher and ran over to try and put out before it spread.. but it only took a moment for this 5 foot fire to get out of control.

I ran up the hill to attempt to get in front of the fast climbing fire in hopes of stopping its accent up the hill but was out run by the quickness of the fire.. I was only wearing sandals at the time which I lost while trying to climb the hillside but my adrenaline was pumping and continued racing up the hillside in bare feet.. my poor feet are in bad shape this morning I tell you

My little fire extinguisher waa no match for this monster, within seconds this little fire was out of control.

I want to thank the other motorists who quickly stopped to try and assist me in putting out this fire.. there was a couple from Saskatchewan and also 2 other tourists from Alberta who also jumped in to try and fight this fire while numerous other motorists just drove by.

Being a Kelowna resident for most of my life it was incredible to see these tourists risk themselves and there property to try and stop this fire.

I am grateful to know that such people still exist.

I just wish we would have been able to stop this before it turned so crazy. I could barely sleep last night because of feeling guilty that I wasn't able to put this out when first noticed.. it looked like it was possible to put out at that point but I'm actually shocked at how quickly it took over everything.

Please people don't throw out your cigarette butts whatever you do.. if you want to smoke then be responsible."

RCMP have not confirmed a cause of the fire as it is still under investigation.

Updates from the BC Wildfire Service's twitter account say they are "assisting the District of Coldstream, City of Vernon and the Regional District of North Okanagan on the Clerke Road (K41708) wildfire located approximately 4 kilometres southwest of Vernon, adjacent to Highway 97.

The fire is estimated at 20 hectares in size and is now classified as “Being Held” which means that sufficient suppression action has been taken and the fire is not likely to spread beyond existing boundaries.

Overnight, there were 29 BC Wildfire Service personnel assisting local fire departments, along with helicopter support early this morning. For the most up to date information on impacts to Highway 97, please check Drive BC."

Fire crews have had success overnite with the wildfire near Vernon.

Fire information officer Noelle Kekula says "We are happy to say that the crews have achieved being held status."

The blaze broke out late last night. An evacuation order was issued for the Clerke Road area in the District of Coldstream.
The good news is the order was rescinded early this morning so residents are allowed to go home.

This morning we're seeing photos from listeners showing blue sky, charred earth and little smoke. However, that does not mean the fire is out.

"We do have a helicopter bucketing it to cool it down and crews are still on the ground attacking hot spots, so air and ground support."

Kekula says fire suppression efforts will continue throughout the day with the goal of achieving "out" status as soon as possible.

The tactical evacuation on Clerke Road, resulting from a wildfire in the District, has been rescinded.

Residents can now return home - but are still on Evacuation Alert.

An Evacuation Alert means there is still potential risk and residents should be prepared to evacuate at a moments notice.

Things that should be done at this time:

• Gather essential items such as medications, eyeglasses, valuable papers, immediate care needs for dependants and, if you choose, valuable keepsakes, photographs, etc. Make these items available for immediate access for a quick departure.

• Know the location of all family members and determine a planned meeting place should an evacuation be called while separated.

• Prepare to evacuate disabled persons and children. Relocate large pets and livestock to a safe area immediately, if possible.

• Arrange accommodation for your family, if possible. In the event of an evacuation, emergency lodging will be provided if necessary. This lodging will probably not permit pets, so it is suggested that alternate arrangements be made for pets at the same time.

It is important that everyone adhere to the directives given by the authorities to ensure their safety in the event of an evacuation.

We're seeing photos on line now of blue sky over the wildfire scene in the Vernon area.

Only minor smoke and charred earth.

It would seem that the fire fighing effort overnite has had success.

The next Drve BC update is expected at 9.

Several homes in the Clerke road area in the District of Coldstream were evacuated.

At the peak of the blaze..other homes were on evacuation alert.

We are waiting now for official updates from Wildfire BC and the City of Vernon.

Here's the latest from Drive BC.

There is a wildfire between Kalamalka Lakeview Dr and 23 Ave for 7.8 km (4 km south of Coldstream to Vernon).

A wildfire that sparked Friday night in the North Okanagan forced the evactuation of multiple properties.

Residences along Clerke Road near Vernon fleeing their homes to an Emergency Support Services Centre set up at the District of Coldstream's Town Hall.

Residences on Commonage Road have been placed under Evacuation Alert, between Allen Brooks Way and Bailey Road.

So have residences on Kalamalka Lakeview Drive and Carriage Lane, with police going door-to-door overnight to notify residents.

Highway 97 is down to a single-lane in both directions between Kalamalka Lakeview Drive and 23rd Ave an motorists are asked to avoid the area.

The fire is still listed as out of control on the BC Wildfire Service and has covered 15 hectares.

Posts on social media claim the blaze is mainly out but crews remain on scene. 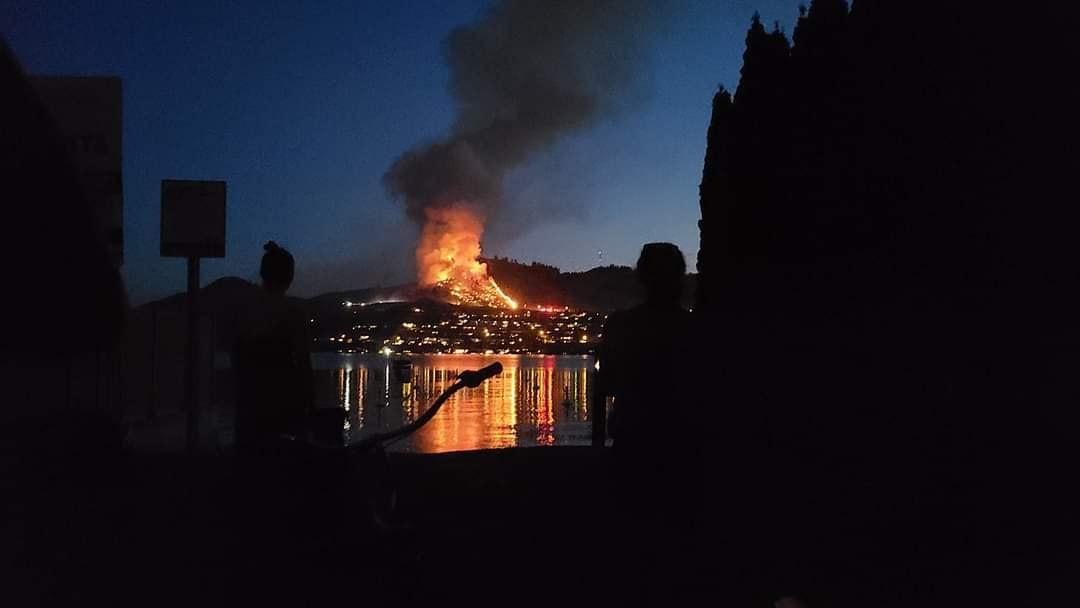