Junior 'A' Hockey to hit Kelowna airwaves through AM 1150

Junior 'A' hockey has a long tenured history in the Interior of the province with teams stretching from Merritt to Penticton in the BCHL.

AM 1150 is proud to announce a team close to home, The West Kelowna Warriors Junior ‘A’ Hockey Club, has signed on to air games on our station.

The Warriors brass say they are thrilled to have select road games broadcast live on AM1150 during the upcoming 2022/23 season.

This marks the first ever local radio partnership in Warriors history, with the first broadcast set for the regular season opener when the Warriors take on the Cowichan Valley Capitals Friday September 23rd.

“AM1150 is the flagship station for sports broadcasting in the Central Okanagan, and we are thrilled to be a part of it!” stated Warriors President Chris Laurie. “This partnership will allow our fans better access to our road games and help expand our footprint amongst local sports fans.”

Bell Media Regional General Manager Ken Kilcullen is looking forward to the new partnership. “We’re very excited to bring play by play of select West Kelowna Warriors games into the extensive sports schedule on AM 1150,” said Kilcullen. “Our team is impressed by the energy, community involvement and dedication to West Kelowna the Warriors bring along with an outstanding fan experience in the rink!  We hope to add to that with the exposure that our group of stations bring.

Warriors Director of Business Development & Communication Chase Johnston will have the call during all Warriors games.

Pictured below is the broadcast schedule. 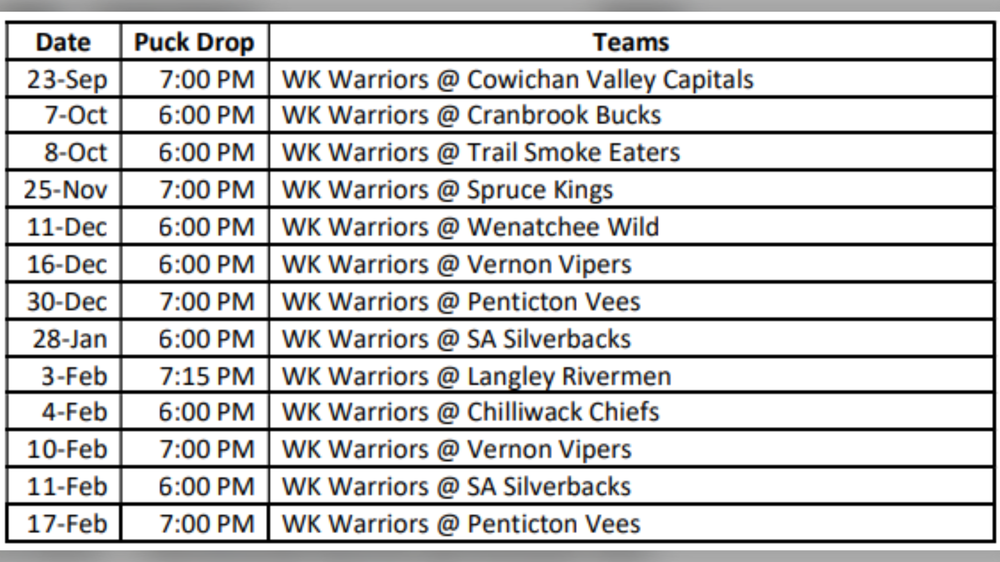