Kelowna RCMP is looking to identify and speak with this man

Kelowna RCMP is publicly releasing surveillance images of a man in the hopes of advancing an investigation into a report of an assault. 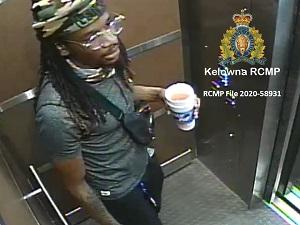 The images were captured on the afternoon of September 20th, 2020 at an apartment building in 1900-block of Pacific Court in Kelowna.

The unknown adult male was described as:

Details regarding the nature of the allegations are not being released at this time.

We are turning to the public in an effort to positively identify the person captured in this surveillance video, says Cpl Jocelyn Noseworthy of the Kelowna RCMP. If you know who this is, please come forward.

If you have information regarding the identity of the man in the photos, you are urged to call the Kelowna RCMP General Investigation Section at 250-762-3300. Or remain completely anonymous by calling Crime Stoppers at 1-800-222-8477 or by leaving a tip online at www.crimestoppers.net