12 hundred cases a day by end of September?

The number of COVID-19 cases recorded daily in British Columbia could approach record levels by late September under a "moderate transmission" scenario, according to new modelling data presented Tuesday.

One projection shared by provincial health officer Dr. Bonnie Henry indicated the number of reported COVID-19 cases could reach approximately 1,200 per day by Sept 27, depending on transmission and vaccination rates. 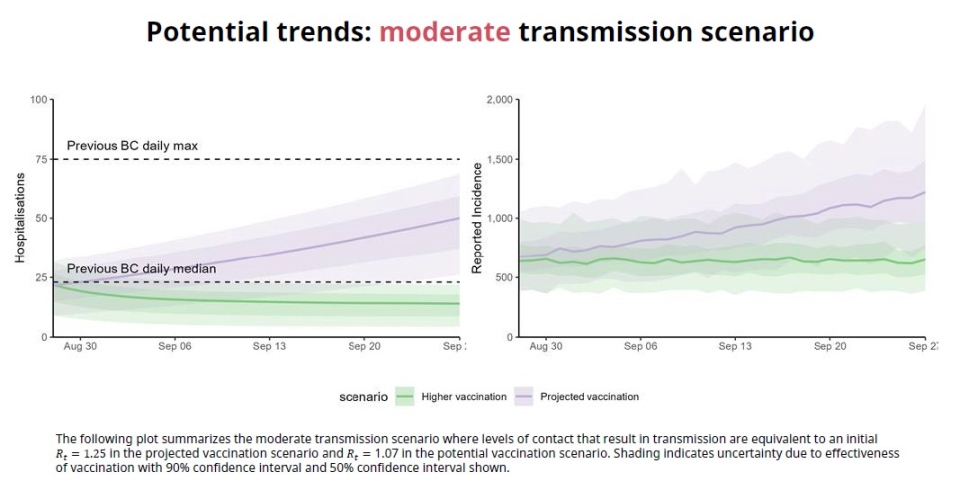 Under the most optimistic scenario presented, daily case numbers would gradually decrease below 500 per day in the middle of the month. Over the last week, the province has recorded an average of 683 cases daily.

The incremental progress health officials are hoping for depends largely on increasing vaccination numbers, particularly in the Interior Health and Northern Health regions, where pockets of under-immunized populations have seen rapid surges in COVID-19 cases this summer.

Henry stressed that vaccination remains overwhelmingly effective at preventing transmission and hospitalization, describing the province's current situation as a "pandemic of the unvaccinated."

"Primarily what we're seeing is people who are fully vaccinated have a very low and stable case rate across the age groups. This tells us that vaccines work, regardless of the variant that's been spreading," she said, referring to the highly contagious Delta strain that now dominates in Canada.

According to B.C.'s data, when adjusted for age differences, the unvaccinated are 12 times likelier to get COVID-19 than those who have received both doses of vaccine, and 35 times likelier to require hospitalization if infected.