A request for proposals has been launched to upgrade and replace 32 playgrounds in Windsor.

James Chacko, Senior Manager of Parks for the City of Windsor, says most of the playgrounds will have themes.

"Typically a lot of the really popular themes that we've received public feedback on are pirate ship themes, nature themes, race car and sports themes," he says. "So it will be based on the overall proponent submissions on which playground will receive which theme, based on the previous public consultations." 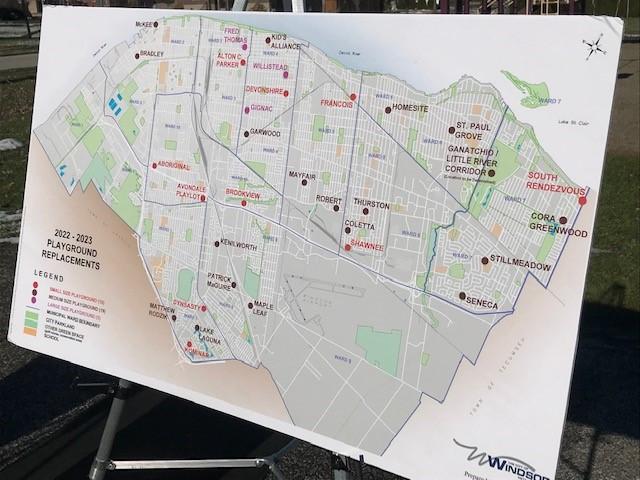 The City of Windsor displays a map detailing 32 playgrounds across Windsor that will be replaced or upgraded in 2022. Nov. 29, 2021 (Photo by Rob Hindi)

Chacko says four to six of the playgrounds will be closed during the construction but they will work to keep the rest open.

"At this point it looks like it's going to be very difficult or impossible to leave them open while the new ones are being built. It's simply that the foot print of the small neighbourhood parks are just too tight for us to allow the existing one to remain open while the new one is being constructed," he says.

Once the contract has been awarded, construction is set to begin in March 2022 with completion by December 2023.

Although playgrounds across the city are categorized as small, medium, and large, the average cost of redevelopment work is estimated at around $300,000 per park.