Every Thursday, weather permitting, Windsor Fire and Rescue will have a fire truck at a different park in all ten wards.

Anyone can stop by for a cooling fire truck sprinkler run, a visit with Sparky and a chance tour a fire truck while learning fire safety tips from fire prevention officers. 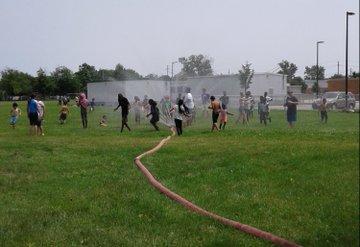 Windsor Fire and Rescue will host Hot Summer Fun Blast every Thursday night, at ten different parks during the summer, to provide a cooling fire truck sprinkler run. (Image courtesy of the City of Windsor)

Mike Coste, Chief Fire Prevention Officer, says it's a great way to engage with the community and offer safety advice.

"For the two hours, we'll also have a fire truck that comes out that sprays water. It's good for the kids, we put a truck up and spray water for an hour, an hour and a half, depending on how many kids are out there. So it's a really good community engagement between the fire department and the public," he says.

Coste says the turnout for this summer event has been good in previous years.

Firefighters will also be grilling hotdogs and offering water for free to those who attend, on a first-come, first-served basis.