Family Kitchen has had its liquor licence suspended by the Alcohol and Gaming Commission of Ontario (AGCO.)

In a release Saturday, the AGCO says the decision was made after the Leamington, Ont. restaurant repeatedly failed to meet, "obligations under the Liquor Licence Act (LLA), and to act with honesty and integrity."

Owner Kristy Leathem opened the restaurant at 73 Erie St. S. for in person dinning in defiance of a provincial order on April 6 — drawing a large crowd, which is also forbidden under current COVID-19 restrictions. 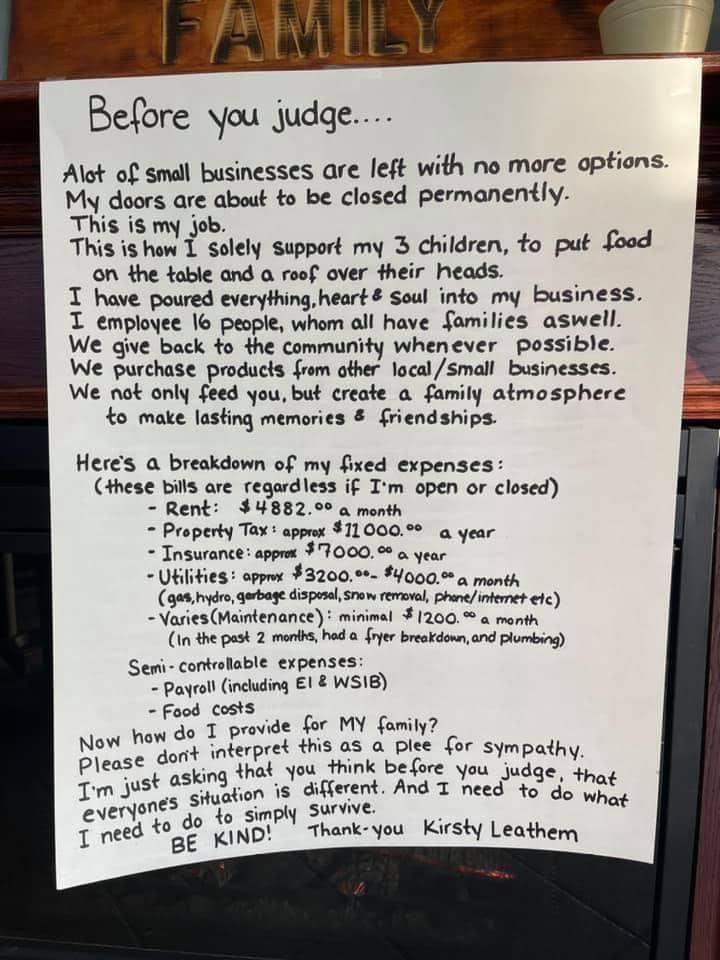 According to the AGCO, that wasn't the first time the restaurant was warned to stop serving in person customers in defiance of public safety guidelines.

On March 6, Essex County OPP laid several charges under the Reopening Ontario Act, according to the AGCO.

The AGCO investigated additional reports of in person dining where the owner, "confirmed to the AGCO that they remain open for dine-in. On April 14. The licensee was again charged with Failing to Comply with a continued Emergency Order, on this occasion by Municipality of Leamington By-law officials."

Family Kitchen's licence is suspended and the AGCO says it will seek to have it permanently revoked, "for reasons of public interest and safety."

The Registrar of the Alcohol and Gaming Commission of Ontario (AGCO) has issued an Order of Interim Suspension of the liquor licence of Family Kitchen located at 73 Erie Street South, Leamington, for reasons of public interest and safety.  The interim suspension takes effect immediately. At the same time, the Registrar has also issued a Notice of Proposal (NOP) to revoke the establishment’s liquor licence for infractions of the Liquor Licence Act (LLA). The Registrar has reasonable grounds to believe that the licence holder will not carry on business in accordance with the law and with integrity and honesty.

The AGCO was advised that on March 6, 2021, the Ontario Provincial Police (OPP) found the establishment to be operating in contravention of the Reopening Ontario Act (ROA). The licensee was charged with breaching an Order made under the Emergency Management and Public Protection Act (EMCPA) and continued under the ROA. On April 8, 2021, a Declaration of Emergency and a Province wide Stay-at-Home Order was made under the EMCPA.  The licence holder has since repeatedly contravened the Orders made under the EMCPA.

On April 9, 2021 and then again on April 15, 2021, an AGCO Compliance Official (CO) attended the licensed premises and patrons were observed dining within the licensed establishment. The licence holder has confirmed to the AGCO that they remain open for dine-in. On April 14 2021 the licensee was again charged with Failing to Comply with a continued Emergency Order, on this occasion by Municipality of Leamington By-law officials.

Those who hold a licence to sell alcohol are responsible for meeting their obligations under the LLA, and to act with honesty and integrity.

The AGCO regularly conducts compliance activities at liquor licensed establishments across the province and commends the vast majority of licensees for operating responsibly.

There are consequences for licence holders who do not meet these requirements, including the possibility of an Order of Monetary Penalty, a temporary suspension of the licence, or in the most serious cases a revocation of the licence.

An establishment served with an interim suspension or a NOP has the right to appeal the Registrar’s action to the Licence Appeal Tribunal, which is an adjudicative tribunal independent of the AGCO and part of Tribunals Ontario.