The Downtown Mission is tightening its belt.

"Donations are higher than they've ever been, year over year, they're just not enough to match the demand," says Executive Director Reverend Ron Dunn.

He says the mission is making some changes that will impact services.

Dunn says the mission will no longer be a 24-hour operation instead it will be a 21-hour service.

The mission is also making operational changes in its kitchen, eliminating its text and chat services and reducing staff in the Community Dental Services Program.

He says the changes are needed because the mission's 2019 financial objectives were not met.

Dunn says the downward trend starting two years ago after the mission announced it was moving to the Windsor Public Library Central Branch.

"There seems to be a link between when we made the announcement and when our donations started to soften," says Dunn.  "So we really believe that there are a number people who aren't supporting us because of the library purchase basically in fact, that they just don't have the information that they need and we've been doing our best to get that information out." 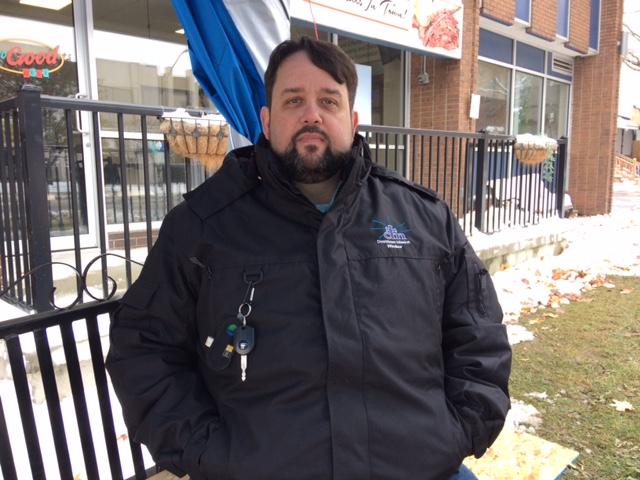 Downtown Mission Executive Director Ron Dunn is sleeping outside on a bench to raise awareness about homelessness. November 14, 2019 (Photo by AM800's Teresinha Medeiros)

He says demand is up for programs and services the mission provides.

"These decisions to tighten our belt and suspend some programming and do the things that we're doing, they're difficult decisions for sure," says Dunn.  "We were already running a tight ship, we already didn't have enough staff now we have less and we're doing more with less but at the end of the day, we had to make these decisions in the best interest of these that we serve."

Dunn says the mission has issued three layoff notices but since last year are down 14 employees.

He says the mission will continue to provide its Fresh Food Recovery Program.

The program was going to be put on hold but three businesses stepped forward to save the program.

It provides food to 64 local schools and organizations.

Dunn says the mission continues to ask the public for assistance.