Back To The Drawing Board For Wyandotte World Marketplace

A $1.4-million redevelopment of the Wyandotte Town Centre from Glengarry Ave to Gladstone Ave has been turned down.

The Wyandotte Town Centre BIA had put together a plan with a 'world marketplace theme' which included a canopy of colourful banners over the street as well as several other facade improvements.

Council voted against the plan for a number of reasons including safety concerns, a lack of input from the city, the price to maintain the banners and who would maintain them.

She says the world marketplace theme would have been a perfect fit.

"The world marketplace idea builds on what already exists and we do have a number of different self-identified cultures that coexist quite peacefully in that neighbourhood and we're very, very pleased about that. We wanted to really emphasize that in our world marketplace theme."

Kowalska says there was a lot of excitement surrounding the project. 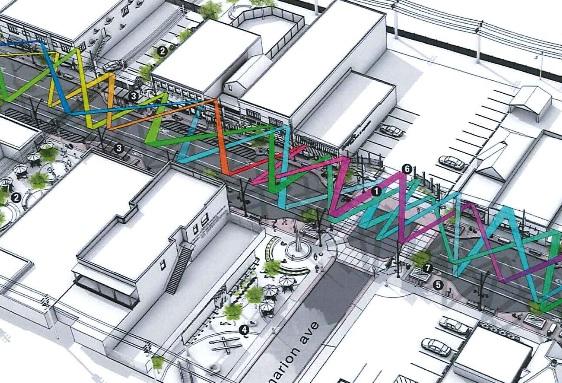 Design by Architecttura Inc for the Wyandotte Town Centre BIA

She says business owners were ready for a change.

"Their dedication to neighbourhood revitalization does not depend on decisions made by a city council. The enthusiasm is there, the excitement is there and we are willing to put forward the resources that it takes to make these things happen."

The banners would have been up more than 200 days a year, being taken down in the winter months.

The city had set aside $1-million for the project in the 2017 enhanced capital budget while the BIA would have covered the additional $400,000.

The $1-million is still available to the BIA which now has to draft a new plan which aligns with the city's vision for neighbourhood districts across Windsor.