Residents from all over the municipality of Lakeshore got together on Saturday to discuss Belle River's Service Ontario centre.

The centre has been shut down twice in the past four years, which has resulted in many residents going to Windsor for basic services.

The facality was previously privately operated but is now closed.

The Government of Ontario says they have had third party service providers bid on running the centre.

Currently, the new operator has not been selected.

Residents say they would like to see the centre become publicly operated by government workers. 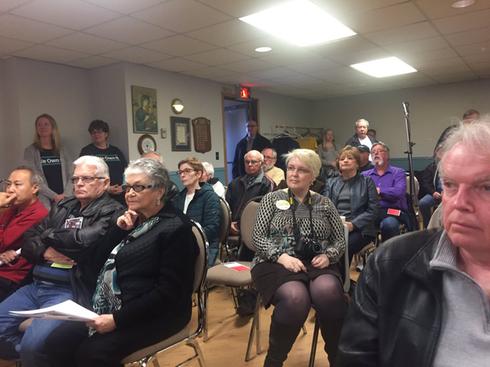 Belle River Residents attend a rally against the privatization of the municipality's Service Ontario centre. (Photo by AM800's John Hutton)

MPP for Essex, Taras Natyshak, says he will be fighting to have the residents' request granted by the government.

"We need continuity of service," says Natyshak. "These are mandated requirements for people to have licenses, health cards and birth certificates. We can not escape that. That being said, it should be convenient enough for people to access to those services."

He says the government needs to stop privatizing services.

"We are calling on the Provincial Government to take back ownership of the service centre in Belle River," says Natyshak. "People should not  have to be inconvenienced and travel outside of Lakeshore to obtain some of the most basic regulatory certifications that we need such as licenses, and health cards."

Natyshak says residents can give him a call if they have any questions regarding Belle River's Service Ontario centre.

The centre is set to re-open by late June.