An astounding 1,400 plus riders hit the road for the seventh annual Bob Probert Ride.

The former Detroit Red Wings tough guy, Probert passed away in 2010 from a massive heart attack at the age of 45.

More than $120,000 in proceeds donated this year will go towards cardiac wellness programs throughout Windsor-Essex in his honour.

Riders gathered at Thunder Road Harley Davidson on Huron Church Rd. Sunday morning to begin a tour through Windsor-Essex ending at the Caboto Club on Tecumseh Rd. E. for food and refreshments.

Former NHL tough guy Dave Hutchison captained the ride and he says it was a privilege lead the event in memory of his friend.

"To follow the footsteps, or at least the road tracks, of guys like Chris Chelios and Ryan Vandenbush, looking forward to it," says Hutchison. "Just being apart of this is wonderful. Bob was a good friend and we have a real tight NHL alumni family, we all support each other, this is just another one of the things we do."

Hutchison told AM800 News he only got to spend six years with Probert, but over that time they became close.

"We went over five or six times and visited with the troops right in Kandahar Air Field (Afghanistan) and it was a wonderful experience. The soldiers were really grateful for us being there," he says. "We played ball hockey, brought the Stanley Cup over with us, what a wonderful time we had. To be with those soldiers really puts everything back into perspective about being an athlete I'll tell you."

Hutchison says it's amazing to see how much support the ride continues to draw year in and year out. 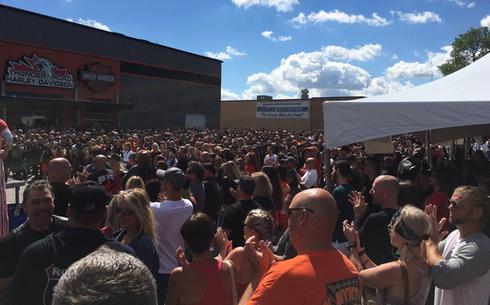 "Everything, it just keeps getting bigger and bigger every year and everyone's just raring and revving to go here now except one thing, they're waiting for me, I've got to run," says Hutchison.

The annual Bob Probert Ride has now raised more than $750,000 in support of cardiac programs throughout Windsor Essex.