Budget Deliberations to Get Underway in Windsor

The City of Windsor is expected to hold the line on property taxes as 2021 budget deliberations get underway Monday.

As heard on AM800 News, the proposed tax freeze doesn’t take nearly $38-million in “unfounded liabilities” caused by the COVID-19 pandemic into account. 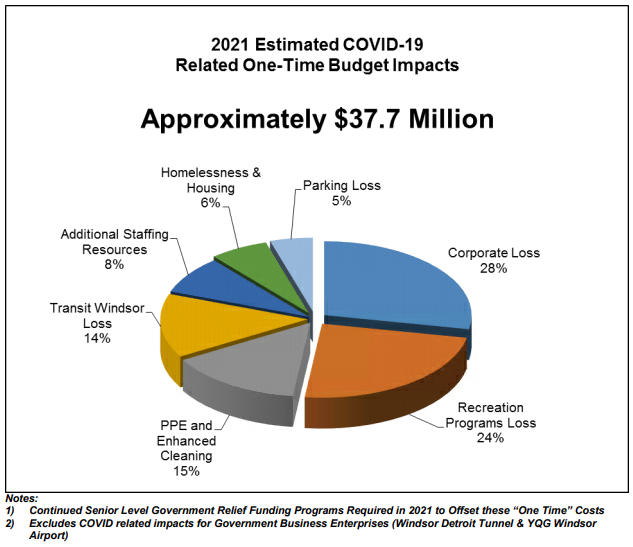 (Graphic courtesy of The City of Windsor)

Windsor Mayor Drew Dilkens says the premier and the prime minister are aware of financial hardships in areas like transit.

"The prime minister was very favourable to making sure that the federal government is a partner in that and I expect the premier and the provincial government will also be partners," he says. "There is no municipality in Ontario that runs a transit system that can break even this year. It's just physically impossible."

If upper-levels of government don't shore up the $38-million shortfall, Dilkens says it will have an impact on the 2022 Budget.

"I think the government recognizes that and doesn't want to see us cut capital projects because those create jobs and I don't think any resident wants to pick up a $38-million tab, which would an equivalent to a nine per cent increase on the property tax roll," he added.

When it comes to saving for a rainy day, Dilkens says the city is "in great shape" this year, but 2022 might be a different story.

"So we will get to the end of the year, the question is how big will the deficit be? We're hoping that it's zero like it ended up in 2020," he says. "We won't know until the federal and provincial governments have their meetings and decide on how much money they're going to send down to municipalities like ours."

He says administration denied the first phase of the Transit Windsor Master Plan that would create Route 18 at a cost of $537,000 due to low ridership projections.

"So if we want to see ridership climb back up to where it was pre-COVID-19, we have to make sure the service levels are there," he says. "We can start by catering to our base, who are students."

Bortolin says he'll also be pushing for two additional outreach workers at a cost of $140,000.

He says the city currently has two workers responding to calls involving addiction and homelessness instead of Windsor Police Service.

Bortolin says the program is working and there will be an opportunity to recoup some of the cost from the province.

He says an additional $192,000 in resources is needed for the city's Climate Mitigation Strategy.

"This would allow us to apply for federal grants with matching dollars, create work collaborations with the University of Windsor and St. Clair College on climate initiatives," says Bortolin. "We declared a Climate Emergency last year, if we're serious about that, how could we not fund it?"

The city’s 10-year capital budget features $170-million worth of investments in parks, culture, roads, sewers and active transportation in 2021.

The city projects it will spend roughly $1.6-billion on those types of investments by 2030.

He says the increase could be covered by downsizing funding for some non-essential events, using the $600,000 allotted for the Bright Lights Festival as an example.

Visit www.citywindsor.ca for a breakdown of the 2021 budget.