Amherstburg councillor Rick Fryer is looking for a public explanation from local school boards after buses were allowed to run during what proved to be record snowfall in Windsor-Essex.

"Something has to be brought out publicly either through the school boards or the school board trustees," says Fryer. "They need to make sure residents, parents and school bus drivers have the ability to say, 'What's going on and how do you make decisions?'"

As AM800 News first reported, Fryer called for "accountability" from the decision makers in charge of giving the green or red light to school buses during poor weather.

Speaking on AM800s The Lynn Martin Show, Gabrielle McMillen with Windsor-Essex Student Transportation Services defended the decision to send buses out. McMillen says the service had 21 spotters working on Wednesday and conditions on area roadways were acceptable with good visibility ahead of the morning drive to school.

Fryer pushed to bring representatives from the service before Amherstburg council, but didn't find enough support around the table.

Councillor Joan Courtney stressed the decision to send buses out can be a "no win" situation while councillor Jason Lavigne argued it's not council's place to "reprimand" those with WESTS. 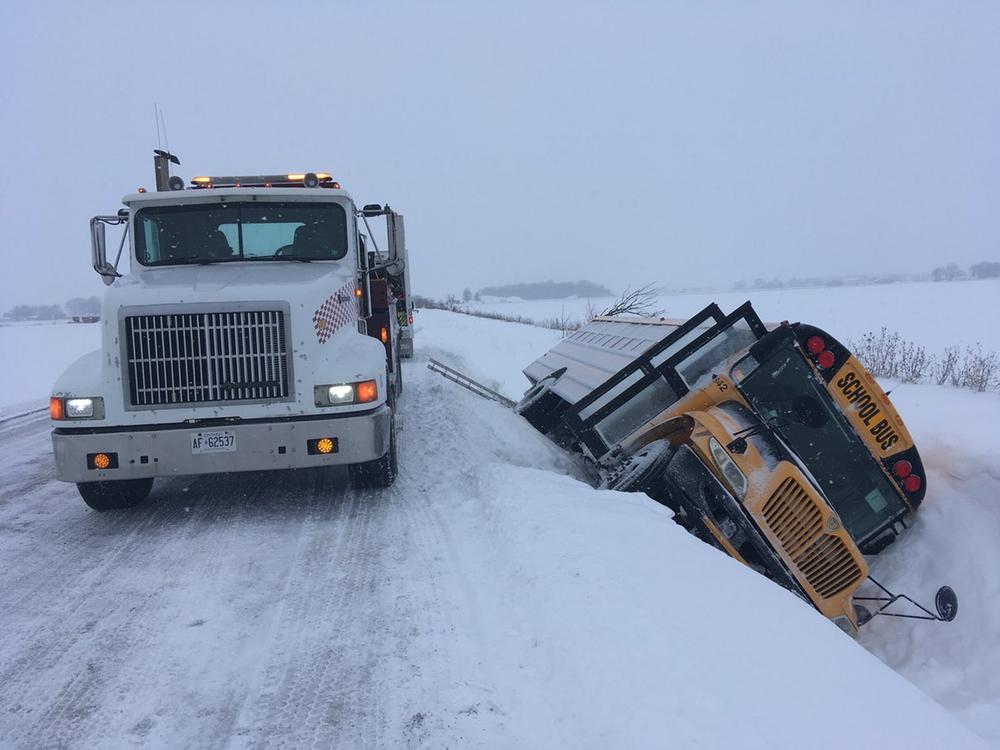 A school bus in the ditch after leaving the road during the morning commute on 14th Concession near Walker Side Road. February 7, 2018 (Photo by Kimberley Johnson)

Fryer calls council's decision "disheartening" with only councillor Diane Pouget voting alongside him.

"I'd like to see council support each other, but in this decision it was obvious they didn't feel it was important enough to have the safety of our children looked after," says Fryer.

As far as Fryer is concerned, the issue isn't over and he plans to continue to push for answers that will meet his satisfication.

"If one of those kids were killed in a bus last week, would we be speaking about the same thing — 'We don't want to hear from them,'" says Fryer. "Or if a driver would have gotten in a serious accident? It's their driver's licence even though they've been mandated to go pick-up the students in inclement weather."

Two school buses were involved in crashes on February 7, one bus with 17 students on board, but no one was hurt.

Buses were cancelled on February 9 as snow continued to pound the region.