The University of Windsor received calls on Tuesday morning in regards to a suspicious person following a female student on campus.

According to a social media post from a student, a person wearing a black hoodie allegedly ran towards her from across the street on Monday night.

The post says when the student got to their car, the suspicious person went towards their passenger side.

The student says they drove away and called the campus police, who put them on hold and told her they were resolving a similar situation. 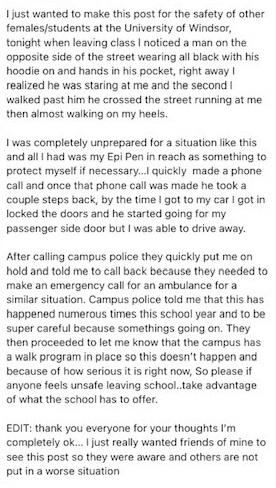 Director of Campus Police Matthew D'Asti says safety is their number one priority.

"It's being investigated by our office and we also have a close working relationship with the Windsor Police Service and we've been able to make them aware of what has taken place. We've talked to the complainant in this matter and have encouraged her to report the matter to Windsor Police Services as well."

D'Asti says the Safe Lancers App is a great tool students could use if they are feeling unsafe on campus.

"If you are walking late at night for instance and you're alone and you want campus police to be aware, you can activate this virtual walk home feature on the app and our campus police officers at dispatch will actually see you on our GPS screens and we will follow you through your mobile device."

He says in his two years working as Director of Campus Police this is the first time he has heard of a situation similar to this one.

D'Asti says the Campus Police alongside the Windsor police will continue their investigation of the situation.

The University of Windsor Students Alliance will also be re-implementing its walksafe service.