After a marathon debate that included more than 50 delegates, Windsor council voted 7-4 in favour of supporting the new mega hospital on County Rd. 42 and the 9th Concession.

Mayor Drew Dilkens presented the motion in an effort to send a clear message to the province it's time to move forward on the $2-billion project.

Councillor Jo-Anne Gignac voted in favour of the motion and says it's time to move on.

"This is a conversation that's been going on since before I was elected in 2003. The state of the medical facilities in this city have been challenged for longer than 20 years. I'm not prepared to wait, we've waited too long."

Fred Francis was in favour as well and says when making decisions like this, councillors need to think beyond just their own ward.

"When we talk about location, we're all ward councillors and our focus is that narrow, but think about the decision makers in Queens Park. Do you really think the decision makers in Queens Park are looking at Windsor-Essex and dividing it up between wards or are they looking at us and saying they have old medical facilities, they need a new medical facility?"

Councillor Jim Morrison also voted in favour and says, regardless of the location, Windsor-Essex needs a new hospital.

"It' all about health care. Location is very secondary to me in this case and we need to move forward. I hope that we can just get this thing going and we'll see something come up from the ground in my lifetime." 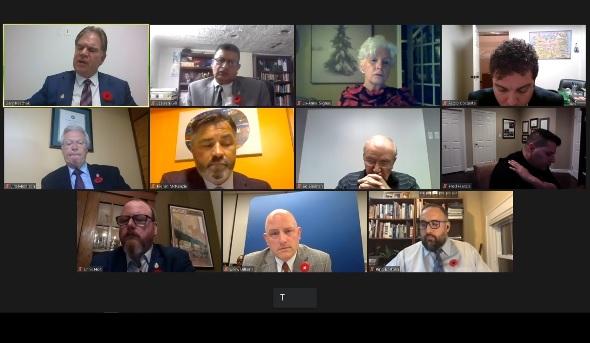 Windsor council seen on November 9, 2020 (Photo courtesy of the City of Windsor)

Kieran McKenzie was one of the four councillors opposed to the motion — he's not convinced all the pieces of the puzzle have been put together.

"I cannot endorse a plan to develop the mega hospital at the proposed site until such time as I see that we are on track to make the investments that will be required to ensure that the residents I represent will not be negatively impacted by this investment. Show me a plan."

Councillor Chris Holt opposed to the motion as he believes money should not be spent on hollowing out the city's core.

"I am being asked to cast my vote in support of basically writing a blank cheque and I need to know the effects it will have on the core of the city. Do I believe that it will cause irreparable damage to the city? Yes I do. Do I believe our infrastructure deficit will skyrocket? Yes I do."

Rino Bortolin also opposed to the motion — while he supports a new hospital, he says the process has been flawed.

"We all support a new hospital. A new hospital isn't just about the health outcomes inside the four walls of that location. It's about community health and well being. It is so unfortunate that this debate has become so polarized. We've created narratives that blame and point fingers. We can do better."

Last month, Windsor Regional Hospital officially acquired the 60-acres of land needed for the new hospital at a cost of $6-million.

The deal allows Stage Two planning to begin which includes a detailed description of the programs to be delivered, staffing, equipment and space required along with preliminary designs.

There's no word yet on when construction will begin.