The City of Windsor and Town of Tecumseh are benefiting from federal and provincial funding.

Kusmierczyk says the city will be getting more than a dozen new buses for Transit Windsor.

"In Windsor, the purchase of 19 buses will allow the city to replace 16 buses that exceeded their useful life span while expanding the fleets capacity by three additional buses to meet to the systems needs and 100 new bus shelters will be installed," he says.

The city will be getting three new crosswalks on Drouillard Road, University Avenue and Lauzon Road.

"The construction and rehabilitation of sidewalks, pathways and bike lanes throughout the city on major roads like Grand Marais and Dougall Avenue will make it safer and easier for pedestrians and cyclists to commute to their destinations to directly access public transit," says Kusmierczyk.

In Tecumseh, he says projects focus on a new multi-purpose pathway.

"The construction of a new three kilometre multi-purpose pathway will link the Tecumseh Hamlet to the Tecumseh Transit Service providing residents with easier access to public transit," says Kusmierczyk.  "Together these investments will make it easier for residents to get around their community safely while protecting their environment."

Nine of the projects are in Windsor while one is in Tecumseh with Windsor's portion being more than $25.1 million and Tecumseh's $580,314.

The federal government is committing more than $12.6-million while the province is providing over $10.5-million.

The two levels of government previously announced the funding and work has already begun on some of the projects. 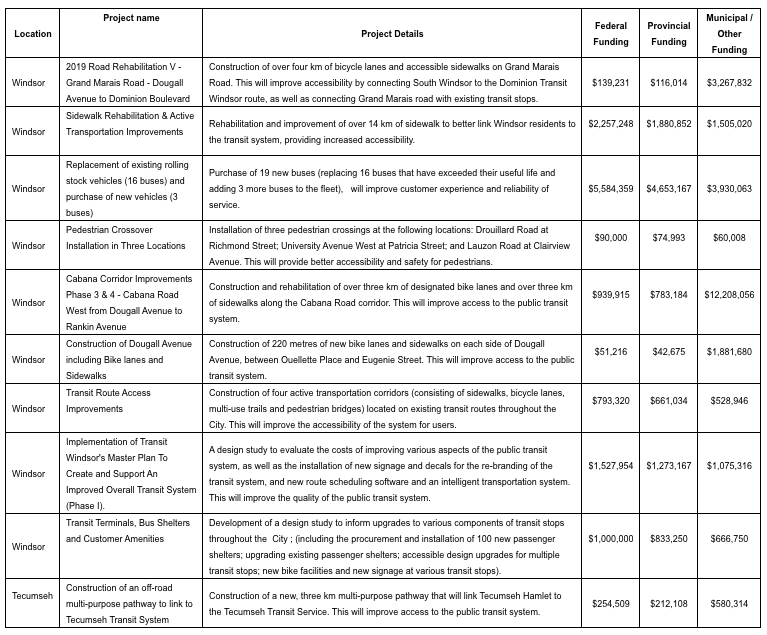