Firearms Seizures Up Since COVID-19 Travel Ban at the Border

U.S. Customs and Border Protection’s Detroit Field Office has seized 81 firearms since a non-essential travel ban was put in place at the Canada-U.S. border.

Between March 21, to August 21, CBP officers with the Detroit Field Office have seized 81 firearms and over 4,000 rounds of ammunition.

Ports of entry in Michigan include Detroit Metropolitan Airport, The Ambassador Bridge and the Detroit-Windsor Tunnel in Detroit, the Blue Water Bridge in Port Huron, and the International Bridge in Sault Ste. Marie. 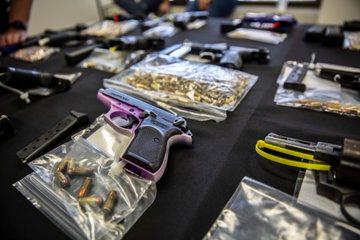 "Of the firearms seized, CBP officers intercepted 58 pistols, 12 revolvers, 7 rifles, and 4 shotguns" Director of Field Operations Christopher Perry said in a release. "The men and women of CBP remain diligent in protecting our communities from illicit firearms and other dangerous contraband attempting to exploit our borders."

The border remains open for essential travel and trade only, with the current restrictions extended until September 21.