It's a far walk if you get kicked off the bus in Harrow, 7.2 km to be exact — and Jenn Brown's boys have gone the distance.

Her 7 and 10 year old boys had been acting out on the bus and she was told if their behavior didn't improve, they wouldn't be allowed back on.

Last Tuesday, she taught them a lesson by having them walk while she carried a sign explaining the situation.

What fueled the controversy was the picture she posted to Facebook with her boys holding the sign that read "being bad and rude to our bus driver, mom is making us walk."

"And then I thought, I probably should make a sign because we live in a really good area and a lot of people that drive by are going to stop and ask if we want a ride," says Brown. "So the intent of the sign was so passing motorists don't offer us a ride because this is the situation, they're being bad and rude to the bus driver." 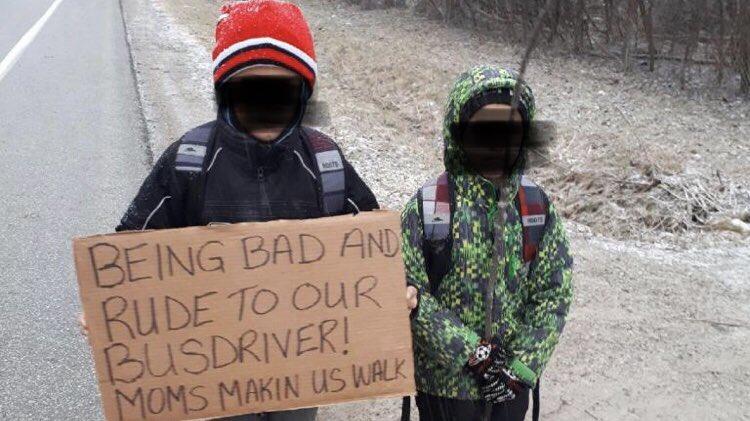 Brown told CTV Windsor's Sacha Long, she received some backlash for what some said was 'shaming' her kids, which she said wasn't the case at all. "Did I think that many people would be interested in me walking my kids go school? absolutely not. Would I have put it on Facebook if this was going to be the outcome? Absolutely not. Have I learned a lesson? Yes, the power of social media is very powerful and when someone sees a story, they pick what they want and they make their own story."

At the end of it all, Brown says the two hour walk to school gave them some quality time together and she actually got a card from the bus driver,  thanking her for teaching her boys a lesson.