A busy weekend is expected in the city core.

"It's a great opportunity for these businesses to recoup some of what they lost over the past year and a half that they've been struggling," says Yeomans.

He says some downtown streets will be closed starting on Friday for extended patios, live entertainment and shopping.

"If last year was any indication as to how well received it was, I think people are anticipating a lot of fun and just a great way to escape the every day for a bit,' he says. 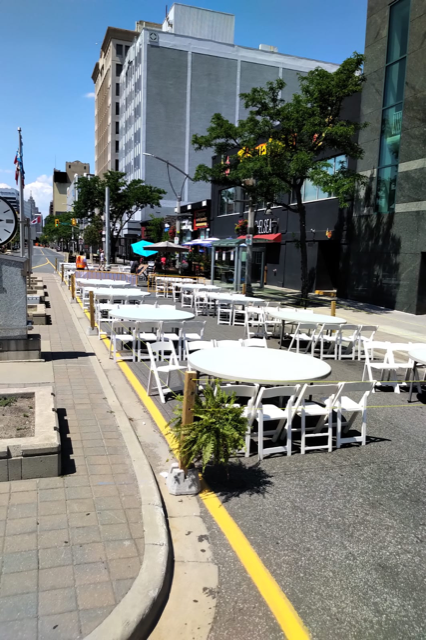 Extended patios have been set up in front of establishments on Ouellette Avenue, July 1, 2020 (Photo courtesy: Patrick Kim, co-owner of The Chelsea Ultra Pub)

Yeomans says prior to the COVID-19 pandemic, the BIA had plans for street closures.

"We had actually looked at a few different ideas for activities and activating space outside before the pandemic but, what the pandemic did was just kind of speed up the progress on some of the things we wanted to do," says Yeomans.

He says Ouellette Avenue from Riverside Drive to Wyandotte will be shut down.

Yeomans adds a portion of University Avenue will also be closed along with Pitt Street.

The street closures begin at 5pm and will continue until Sunday night.