Kingsville is calling on the federal government for help with an invasive species.

Phragmites australis is a reed like plant that groups tightly, can climb meters in height, grows quickly and strangles out surrounding plants by secreting toxins from its roots.

Kingsville will join the Federation of Canadian Municipalities to ask the Canadian government to speed up the review of herbicide products to get rid of the invasive species. 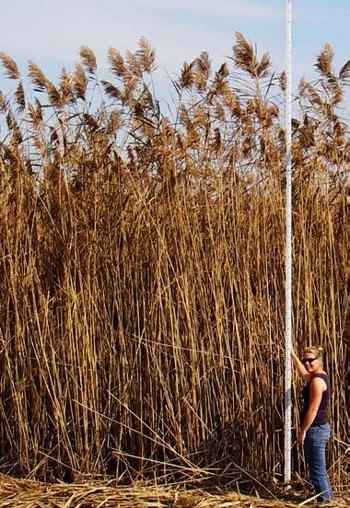 An undated photo of a woman measuring a patch of phragmites australis. (Photo courtesy of www.ontario.ca)

Mayor Nelson Santos tells AM800 News they've tried cutting them down and pulling them out at the root only to see them spring right back up. He says even controlled burns have garnered mixed results.

"Along our agricultural properties they've been blocking up the channels to allow water to drain away and it's become a significant issue in a lot of our drainage maintenance," he says."In our wetlands we've seen it take over and grow over areas from marshland to the point where we actually had to do a prescribed burn in Kingsville and it was a significant burn right on the shores Lake Erie."

Santos says the only sure way to eliminate the plant, is still waiting on government approval.

"Certainly having the herbicide to attack it right at the strength of its base or root is one sure measure will have an impact and eradicate them," added Santos.

Kingsville Town Council gets underway at Monday night at 6pm.