Lakeshore Council is being asked to approve a rezoning application to clear the way for a proposed housing development and a potential new school in Belle River.

The rezoning application going before Tuesday's council meeting is focused on an over 6 hectare (15.49 acre) piece of vacant land at the corner of County Road 22 and Rourke Line Road.

A developer wants to build 39 townhouses and two, six-storey apartment buildings with 60 units in each structure. A portion of the land would also be set aside for a future elementary school and a storm water management pond.

Ward 3 Councillor Kelsey Santarossa has some questions about what this development will do to traffic in that neighbourhood, an area that will see the County of Essex expanding County Road 22 in the near future.

But she says this is well in line with what they're trying to do in Lakeshore when it comes to the Official Plan, to develop County Road 22 in an urban avenue. 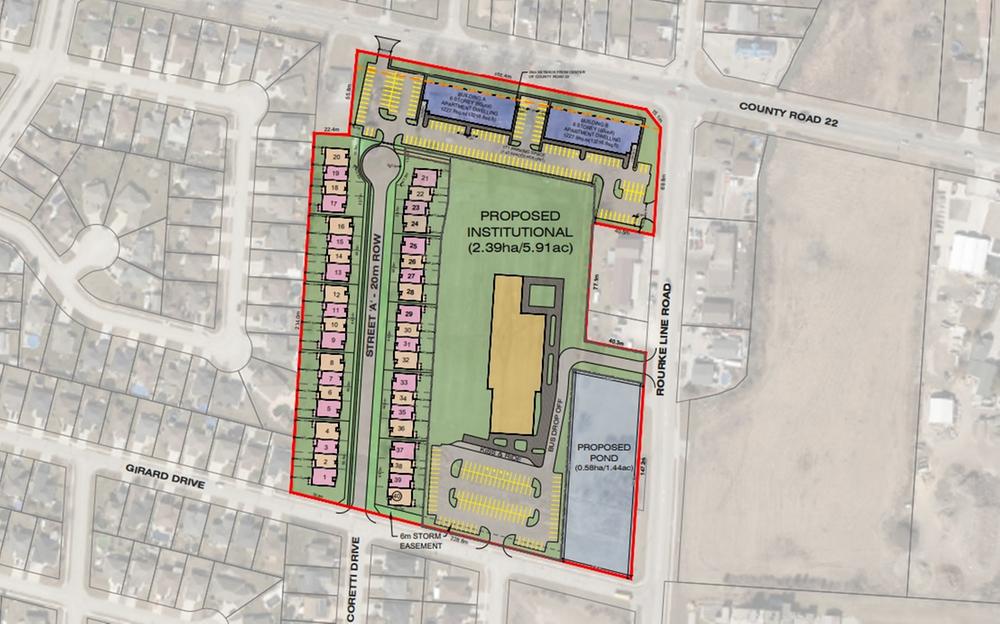 Lakeshore Council is being asked to rezone a vacant piece of land at the corner of County Road 22 and Rourke Line in Belle River to make way for a housing development. The proposed project would see 39 townhouses and two, six-storey apartments buildings with 60 units each. A portion of the land would also be set aside for a new elementary school. June 28, 2022 (Image courtesy of the Municipality of Lakeshore)

Santarossa believes, if approved, this development could lead to a stop light being finally being installed by the County at the intersection of County Road 22 and Rourke.

"What we were told kind of consistently was, it will be dependant on development. Good development will trigger the light there. Right now we know that we don't have a need, while here's a really good kind of development and intensification along that route. I would image this is the trigger everyone was talking about," she says.

"We intensify where development exists right now and we make sure we have the right infrastructure in place," she says. "It makes sure we're not paying for roads out to subdivisions in the middle of no where, or drainage, or other infrastructure components that way. It really allows us to get the best use and the best responsible use for the land we do have for development."