He feels the recommendations are intertwined but council has the option to approve all six, approve and tweak some or reject some.

"If you go through each one individually, yes you probably could do away with one possibly but to me they're all inter-related and there's no benefit in my opinion to stop one of these," he says.

Bondy says he went through the 120 page report extensively.

"It's a project that I think all the details have been worked out, not everything specifically 100 per cent but some of these things are fluid," says Bondy.  "So once we start with a project, we'll say maybe we want to move a project 10 feet east or west or something like that." 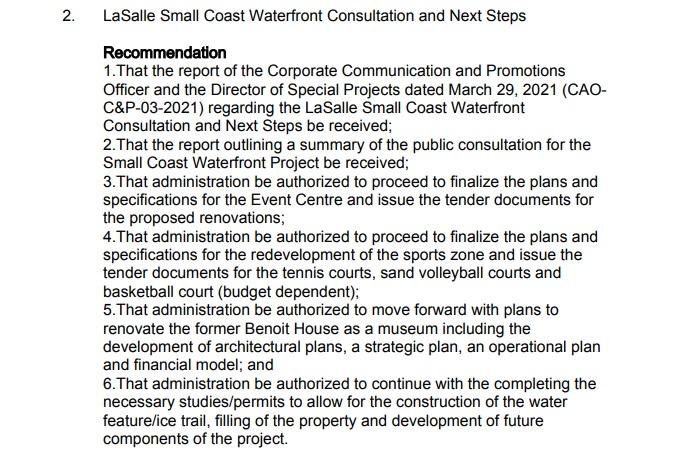 Bondy says he wants to see the project move ahead.

"When you do all the time and investigation and consultation that we've done, it's like wow, now we can put this to fruition and see some of this development come through," says Bondy.

The town unveiled the $50-million plan in November 2019 which includes pedestrian trails, an event plaza along with an event centre, a marina and other recreation features along Front Rd. from Kenwood Blvd. to Ulster St.

Earlier this year, the town conducted a community survey on the project.

Bondy says more than 3000 residents responded, majority of them in favour of the project.