A Windsor legion is honouring the fallen from the Afghanistan War with a new memorial.

Grenon was 23-years-old when he was killed in Afghanistan after his armoured vehicle came under attack in 2008.

The legion unveiled a plaque Sunday with the names and faces of all the soldiers who died during the conflict, with Grenon being featured in the centre.

Grenon's mother, Theresa Charbonneau, was at the unveiling of the memorial.

She says it is a moment she will not forget.

"It instills a great sense of pride," says Charbonneau. "The gesture, the significance of it is great. It is an honour that the legion chooses to do this. It is one of the biggest honours that I have ever gotten." 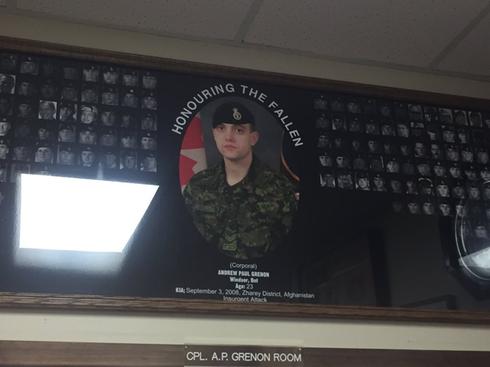 "There is much more to the legion that the average Canadian thinks," says Charbonneau. "They do a lot of good work in the community and especially for veterans. They are a community that does support and honour our serving and our fallen."

She says she is proud Canadians continue to appreciate the country's service members.

"Since the Afghan War and because of the Afghan War, we realize now what the veterans need, what they have done for us and what we should do for them," says Charbonneau. "We are the greatest country and I am proud to be Canadian."

For more information about the Royal Canadian Legion, visit legion.ca.