The president of Windsor Minor Hockey Association is apologizing for controversial comments he made on Facebook in response to recent U.S. women's marches in which women from Windsor took part.

On his personal Facebook page, Dean Lapierre wrote 'Good u dumb bitches' when referencing how some Canadian women were delayed crossing the border en route to the marches in Washington, D.C. .

The comment goes on to say 'Worry about your own Country CANADA.' 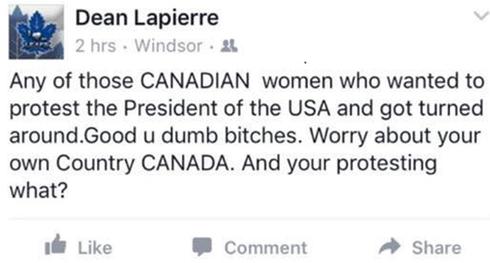 "I understand it is my personal Facebook but, yeah, I do represent Windsor Minor (Hockey Association) and I have for a long time," says Lapierre. "I guess this is a wake-up call that whatever you say out there can be taken the wrong way or spread to the wrong people. The last thing I want to do is for any women to think I'm derogatory towards them because obviously that's not the case."

Lapierre says he's been in touch with some of the association's board members, several of whom are women, and says they believe the comments are being blown out of proportion as they continue to be shared on social media.

Lapierre adds he doesn't believe this will affect his position with Windsor Minor Hockey Association.

The Ontario Minor Hockey Association has confirmed it is launching an internal investigation into Lapierre.

“These comments are offensive and have no place in minor hockey," says Taylor. "The OMHA does not agree with or condone his statements and are looking into the matter internally. We aim to teach our players the value of respect and acceptance of all members of our communities. Although this was posted on Dean’s personal page, we believe he holds a prominent position and has a public profile within the community.”