If you're struggling on what to have for dinner Tuesday night, why not make it a pizza and help with the eradication of polio?

The Rotary Club of LaSalle Centennial is teaming up with local pizza shops for the annual Pizza for Polio fundraiser.

All day Tuesday, more than a dozen pizzerias across Windsor-Essex will be donating a portion of their proceeds to Rotary International's Global Polio Eradication Initiative.

Coordinator Mary Lou Amlin says it's as easy as ordering a pizza.

"That money will go to help eradicate polio worldwide which is something that Rotary has been working on since 1988. At this time, we only have two countries left in the world that have any polio in them. Those are Afghanistan and Pakistan."

She says the world is nearly polio free.

Amlin says it's beneficial for both the pizza shops and Rotary.

"We're thrilled that they can partner with us and want to support us and support the eradication of polio. We're just thrilled about that. This year too, with COVID, it's really beneficial for them. It's an opportunity to get them more sales. So it really is a win/win."

The full list of pizzerias taking part in the fundraiser can be seen below: 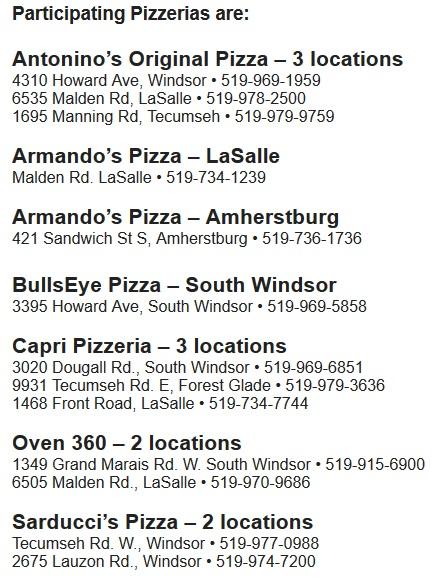