The new addition unveiled Thursday is located between Forest Glade Library and the skate park, and will be open ahead of the Victoria Day long weekend.

The $750,000 investment is part of a $2.2-million sports and recreation upgrade in the area that includes the addition of two basketball courts and a multi-purpose sports court featuring a specialized tile surface.

Next up is the completion of the installation of new pickleball and tennis courts where the old tennis courts were previously located. The $850,000 enhancement is expected to be completed by the first day of summer.  New catch basins have been installed in and around the parking lot area, where the final lift of asphalt paving will be the final touch, adding an additional $200,000 in improvements. 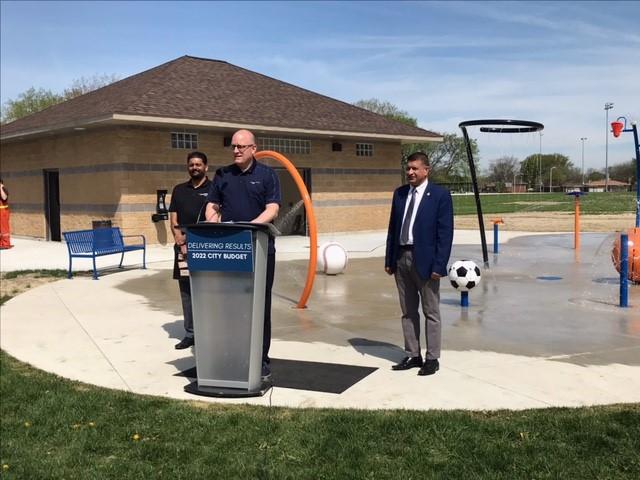 James Chacko, Executive Director of Parks and Facilities for the City of Windsor, says this sports themed splash pad is the ninth stand alone splash pad in a city park.

"This new fully accessible washroom facility will be open to all parks users, along with all of the others washrooms in our parks, seven days a week from 8 a.m. until at least 8 p.m.," he says.

Chacko says it's such a beautiful project for Forest Glade Park.

"It fits in so well with the playground right next to it, all the beautiful sports fields and then certainly the upcoming tennis-pickleball project is certainly going to really put the icing on the cake for everything here at Forest Glade," he adds.

Further park upgrades are underway with $50,000 going towards installation of security cameras to help monitor park activity. In addition, $200,000 in upgraded LED lighting has been installed throughout the park replacing the decades old lighting.

"As summer fast approaches, we are excited to share that improvements to Forest Glade Park have been completed. Residents will now be able to enjoy a brand new splash pad and new washroom facilities. We are committed to a place where families can safely enjoy our recreational facilities and in the coming months will be installing security cameras for the safety of our community," says Ward 7 Councillor Jeewen Gill.