Over $263,000 approved for businesses impacted by Windsor blockade

Over a quarter of a million dollars in financial aid has been approved to help businesses impacted by a blockade along Huron Church Road in Windsor.

On April 1, $2.5-million in funding was announced by FedDev Ontario to provide small businesses with non-repayable contributions of up to $10,000 for costs not covered by other federal programs.

As of May 3, 52 applications have been submitted to the West Windsor Small Business Relief Fund, which is being administered by Invest WindsorEssex.

So far, 46 of the 52 applications have been reviewed, 32 submissions have been approved, while six have been denied for not meeting the program's criteria.

Around $381,000 in funding has been requested as part of the application process, with just over $263,000 approved. Of the approved funding, $242,644 has already been dispersed to 30 of the successful applicants.

Stephen MacKenzie, President and CEO of Invest WindsorEssex, says 27 of the applications were from the accommodation and food services sector.

"When you think of that, the first thing that comes to mind is if they had inventory that was spoiled. When you're selling product, food, it can spoil," he says.

The program has received eight applications from businesses in retail trade, five in health care and social assistance, six in the other category, two in transportation and warehousing, two in finance and insurance, one in educational service and one in professional, scientific and technical service.

MacKenzie says a fair number of applicants received the maximum payout of $10,000. 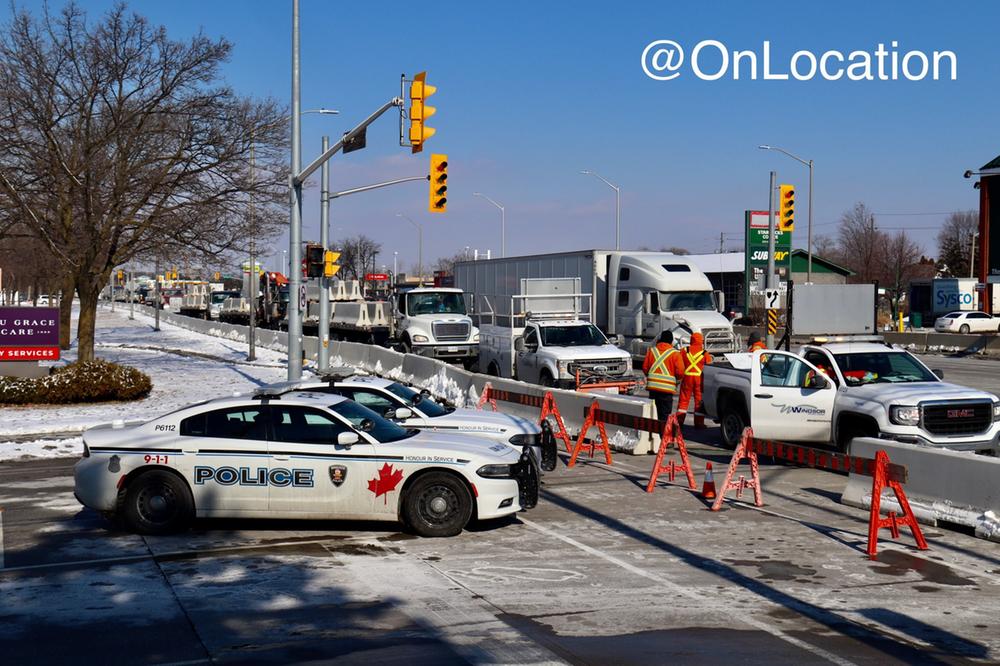 Officers with the Windsor Police Service direct traffic as restrictions are in place along Huron Church Road following a near week long protest near the Ambassador Bridge in Windsor. Feb. 15, 2022 (Photo courtesy of @_OnLocation_

The original deadline to apply for the funding was May 20, but that deadline is being extended to May 27.

MacKenzie is encouraging any impacted business to look at the program and the application on the Invest WindsorEssex website before the deadline.

"Call us here and get some advice with our team that's working on this," he says. "There's definitely money available and as we all know, the impacts were very real on the businesses."

On Feb. 7, a group of people stopped along Huron Church Road heading to the Ambassador Bridge, protesting COVID-19 restrictions and mandates, halting traffic until police officers moved them off the route on Feb. 13.

In the aftermath of the protest, barriers were put in place along Huron Church Road for several weeks to maintain the flow of traffic, but those barriers restricted access to a number of businesses along both sides of the busy route.

Around 240 businesses were identified as potentially being impacted by the blockade, but any businesses applying for the funding would need to meet the criteria set out in the application process.

Any funding that is not used will be returned to FedDev Ontario.