A proposed Chick-Fil-A location in Windsor could be welcomed by some and draw backlash from others.

City Council will decide whether to approve the site plan for the location next to Devonshire Mall at 3060 Howard Ave. Monday night and a Facebook group called Keep Chick-Fil-A out of Windsor popped up just hours after word got out Sunday. 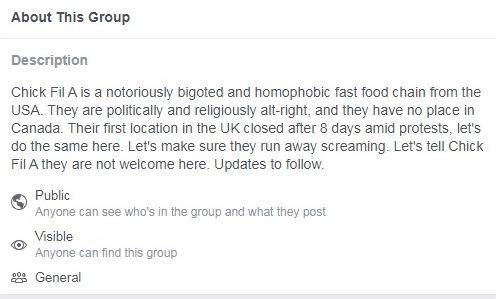 Screenshot of the Keep Chick-Fil-A out of Windsor Facebook group. (Photo via/www.facebook.com)

The third largest fast-food chain in the U.S. has faced harsh criticism due to the company’s CEO Dan Cathy's belief in the "biblical definition of a family unit" and his millions of dollars in donations to charities with a history of discrimination against LGBTQ groups.

Ward 9 Councillor Kieran McKenzie says he's not a fan of the company, but "corporate culture" isn't a factor in site plan decisions.

"I'll be frank; I don't like what I've seen. I think that some of the positions and organizations they've supported are highly questionable," he says. "From the municipality's standpoint however, it's our job to make sure that what's being proposed is a conforming use in terms of the zoning."

At the end of the day McKenzie says the public will show whether they choose to support the fast food chain with their hard earned dollars.

"Whether or not a municipality should be making decisions on if a proposal should go forward based on what the perception is of that corporate culture, that's a dicey game," he says. "It's a free market economy and people will make the decision as to whether or not the business is going to be viable or not."

The company was founded in Hapeville, Georgia in 1946 and there are more than 2,300 locations in the U.S.

No word on when construction would begin if the site plan is approved Monday night.