Dozens of individuals gathered outside of the Windsor Essex County Health Unit to protest against COVID-19 vaccinations for children.

On August 3, they held a demonstration outside pediatrician Dr. Huma Kazmie's office.

The next day, the Windsor-Essex County Health Unit and Windsor Regional Hospital released a statement that the protesters were intimidated patient families and blocking access to Kazmie's office.

During the protest Monday, those protesting stated that their protest on August 3 was peaceful.

Currie Soulliere is the organizer of the protests that have occurred around Windsor.

She says the Windsor-Essex County Health Unit and Windsor Regional Hospital did not tell the truth.

"They made a media release falsely alleging that we were intimidating patients and blocking access to the clinic, which was not true at all."

She adds that the Acting Medical Officer of Health, Dr. Shanker Nesathurai, supported the WECHU and Windsor Regional Hospital following the media release.

She says he asked that those who are protesting to not do it outside of clinics.

"But he also said in the media, which wasn't so hard to hear, it was just 'we'd like you to go somewhere other than a clinic next time', and we were like 'okay, we can do that much'." 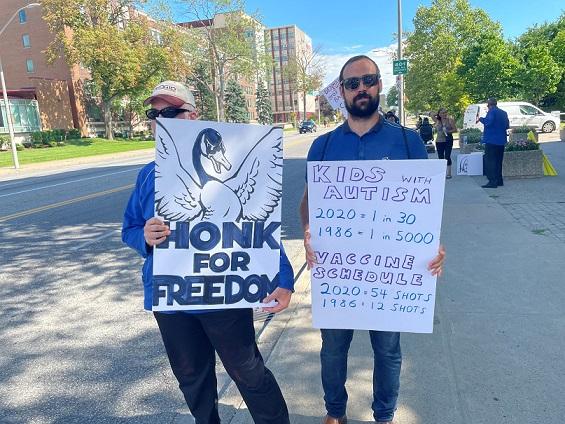 "There's a lot of support, the uptake for less than six years old I think hasn't reached five percent yet, so very clearly people are supportive of at least not enforcing it."

In a statement to CTV News, WECHU declined to comment on the matter at this time.