Unifor Local 2458 has been put on notice by Schlegel Villages.

On Monday, the union had a demonstration planned in the parking lot of the long-term care home in south Windsor but company officials put a stop to it.

Local president Tullio DiPonti says he received a letter, threatening legal action as well as police being called if union members went on the company's property for the event.

The union decided to change the location and held the demonstration out front of the Schlegel Village in east Windsor on McHugh St.

DiPonti says he received the letter from the company's Vice-President of Human Resources.

"This is a message to Mr. Mike Putt, if he thinks he's going to silence us by sending me that letter, it's not going to work," says DiPonti.  "We're going to bring attention to this issue whether they like it or not, we're going to make sure these residents get the care that they deserve and whatever we need to do, we will do." 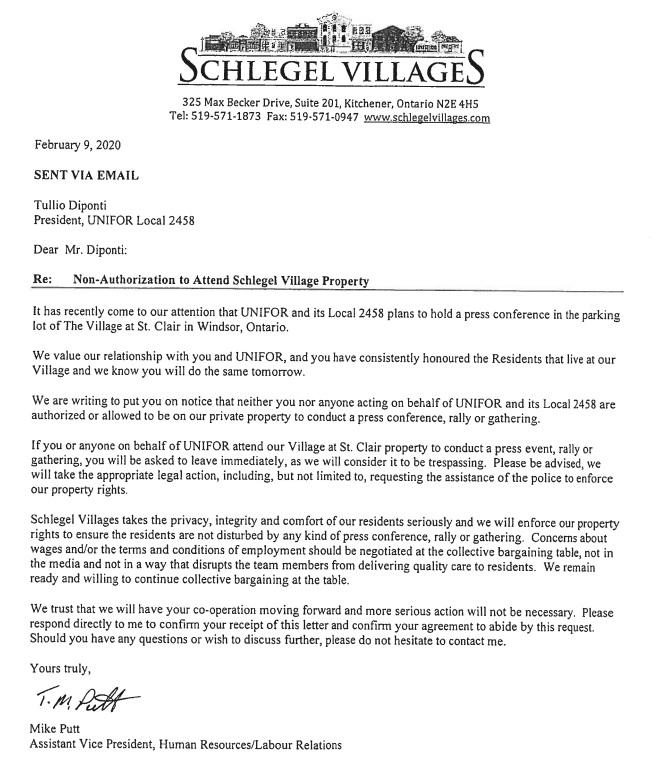 Chris Taylor is a National Representative with Unifor.

He says the union is calling for more staff at the villages.

"We're getting hurt, we're being abused in there, the residents are residents we've never dealt with before in the past and that's not their fault," says Taylor.  "They're simply here, they want to be taken care of, their families want to make sure they're taken care of and by the way it's part of our goal."

As heard on AM800 news last week, contract talks between Unifor Local 2458 and representatives from Schlegel Villages broke off.

The union represents more than 400 personal support workers, registered practical nurses, dietary staff along with some maintenance personnel at the two villages in Windsor.

The workers previous collective agreement expired at the end of November.

No new talks are planned.