Residents are speaking out against a proposed multi-use development on Walker Road.

The project would see 37 high end town homes and a four storey apartment complex with ground floor retail space go up on vacant land between Provincial Road and Highway 401.

Bruce Chapple lives in the area and has started a petition opposing the development citing a number of concerns like increased traffic, privacy and decreased property values.

He says he and many other residents would prefer just a commercial building.

"There's no set plan that it was going to be a big box store or whatever they're saying, who knows? It could just be a strip plaza in there or something and then they're not looking into our yard at night because nobody is there or there isn't any windows in the back either."

Project developer Abdul Habib says the original plan was for a big box development which would have generated far more traffic.

Chapple says he and his neighbours are afraid of losing their backyard paradise.

"Those two storey town homes will be looking directly into my windows and the top level of my house and easily see into my backyard. We have a pool, hot tub, it's cozy back there, not anymore and then what are we going to look at for a view? So that's a concern."

Habib says he's built a number of homes in the area and he doesn't want to upset his customers.

"A lot of the residents are our friends and customers and we have a good relationship with them and we built many homes there. A few hundred homes, in fact, and everybody was happy when we left and we're still in the area."

Habib adds, he built the majority of the adjoining subdivision and this would complete the vision he had in his mind.

"So that empty spot is always empty and in fact, it's not great looking either. So by having that development finish the subdivision it will add value to the houses, the neighbourhood and it will be more secure for everybody. It will service the community. It will really add to the community." 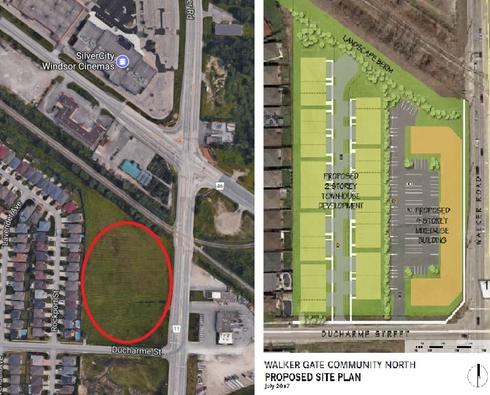 "It shouldn't be rushed and you know what? He should have paid more attention to the residents that live right there and he's destroying our lives by doing this is how I feel. I will have to move. I'm going to be looking at the top of a two storey townhouse. A commercial building would be far different than what he's offering."

The land in question is currently zoned for commercial use only.

Habib would like to see that changed to include residential.

The development will go before City Council for final approval at a future meeting.