Kitchen renovations are being listed as the most worthwhile home improvement project to increase your property's value, but the impact of basement renovations is on the rise.

According to the Royal LePage Home Renovation ROI report, kitchen renovations have the potential to increase a property's value by 20 per cent.

Royal LePage surveyed 340 real estate professionals across the country as part of the return on investment report, which also found a bathroom renovation could increase a home's value by 16 per cent.

Mike Heddle, broker and team leader with Royal LePage State Realty, says there was a slight increase when it came to finished basements and apartments, citing multigenerational living as a factor.

"Some young buyers putting in in-law suites, so we saw the ranking of basement apartments increase in the overall returns. We're finding across the country that typically if you put a basement suite in, you will see around a 15 per cent appreciation in home value," he says.

"Kitchens and bathrooms sell homes. The kitchen particularly, look at the way we live today. When we do entertain and we do have people in our home, quite often is where we feed our guests and feed our family," he says. 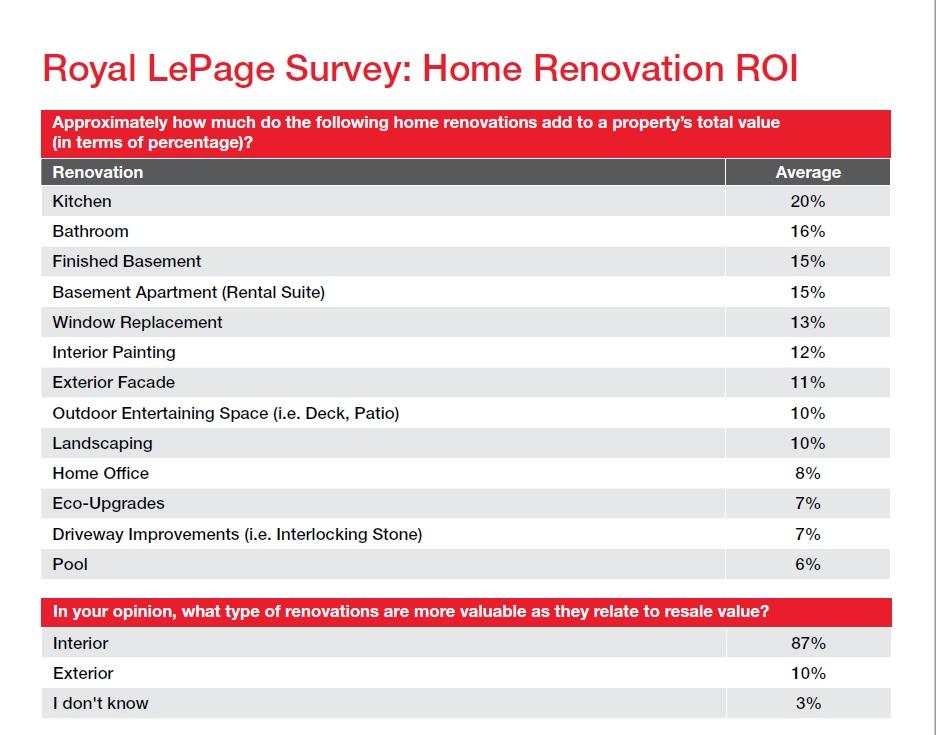 Investing in a pool is considered the least worthwhile renovation to increase a property's value. According to the survey, a pool can increase a home's value by an average of only six per cent.

Heddle says a six per cent return on a $50,000 improvement like a pool can still make sense.

"Although pool rated fairly low, traditional I would apply the rule of thirds. A third of the populace want a pool, a third do not want a pool and a third are indifferent. A pool still continues to be a good return but one of the lower rankings for a worthwhile investment," he adds.