A proposed townhouse development in Tecumseh is once again getting push back from the community.

In 2019, it was standing room only for a public meeting to discuss the plan for the former Victoria Public School site on Dillon Drive and Tuesday night saw much of the same with more than 20 residents gathering via Zoom to present their concerns to council.

The original proposal included a six storey building and 96 units — that's been scaled back to two and three storey buildings with a total of 63 units, but those who live nearby are still not happy.

Resident Brady Boghean says, up to this point, the developer has not been working in good faith.

"The developer has continuously not met proper timelines. After the demolition, the remains of the school, a large pile of rubble, was left for six months. The grass was left to get knee high. Both notably increasing the amount of vermin and rodent activity in our neighbourhood," says Boghean.

"We were here first. If you want to build something you have to fit in with the rest of us. The density is too great for the location. The height of the three storey stacked townhomes exceeds our official plan and there is still a real fear of more flooding," says Teno. 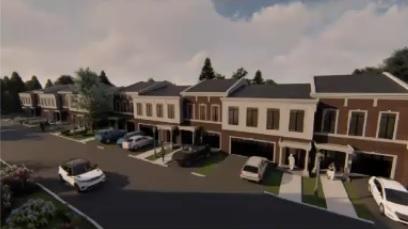 "The developer is cramming in as many units as possible for the sake of greater profitability. I'm all for making money, but gouging at the expense of innocent people indicates a lack of integrity and concern. Changing an area in a neighbourhood to suit their needs rather than staying in line with our current landscape," says Cole.

The site's developer, David Ublansky of Briday Victoria Development, was on hand to address concerns stating he too lives in the area and would only want to bring something he'd be proud of to the neighbourhood.

No decision was made on the development Tuesday night.

Administration will now prepare a report on the feedback from residents and present it to council at a later date.