Thousands of mourners, many wearing purple hijabs, descended on a London, Ontario mosque along with several dignitaries Monday night.

They attended an outdoor vigil in honour of four members of a Muslim family killed in what police have called a targeted hate crime.

The attack wiped out three generations of the family, including 15-year-old Yumna Salman, and sent her nine-year-old brother to hospital.

Relatives identified the other victims as Yumna's parents, Salman Afzaal, 46 and Madiha Salman, 44, and her 74-year-old grandmother.

Speakers on the steps of the London Muslim Mosque spoke of resiliency, of not cowing to fear or hate.

They called for a fight against Islamophobia. 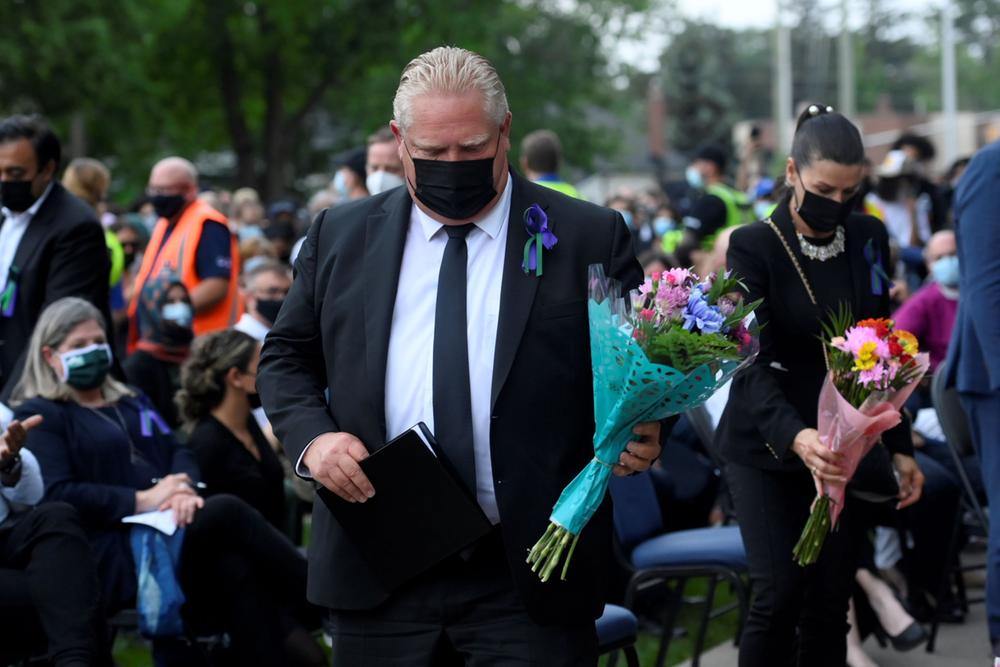 Ontario Premier Doug Ford walks to place flowers at a vigil for the victims of the deadly vehicle attack on five members of the Canadian Muslim community in London, Ont., on Tuesday, June 8, 2021. Four of the members of the family died and one is in critical condition. Police have charged a London man with four counts of murder and one count of attempted murder. THE CANADIAN PRESS/Nathan Denette

Prime Minister Justin Trudeau expressed his sympathies as he denounced the act of evil.

He says there were no words to ease the grief of having three generations murdered in their neighbourhood.

Trudeau says Islamophobia has hurt the Muslim-Canadian community too many times' citing previous attacks such as one on the mosque in Quebec City.

He says Canada must choose a better way.

Ontario Premier Doug Ford says the attack on a Muslim family in London, Ontario was "nothing short of a terrorist attack."

Ford is offered condolences to the family and the Muslim community.