If you live in Windsor, Ont. or Leamington, Ont. and you were convinced a tornado touched down last weekend, you weren't wrong.

The Northern Tornadoes Project confirmed a tornado touched down along a 2.4 km stretch along Tecumseh Road from Windermere Road to Francois Road in Windsor, Ont. at around 9:20 p.m. Saturday. 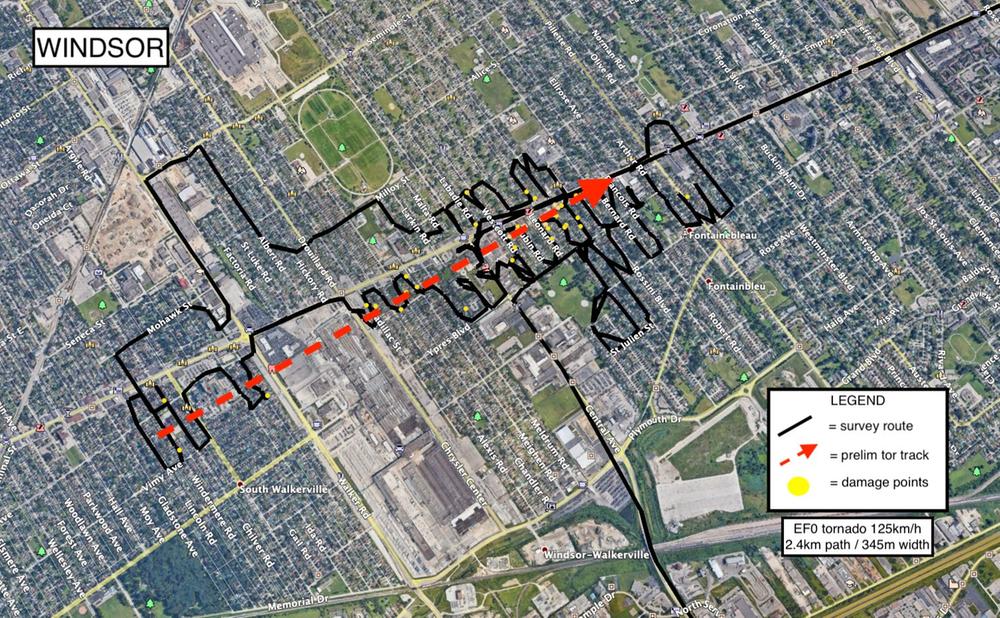 A map tracking tornado damage through Windsor, Ont. on July 22, 2021 (Photo via Twitter/@westernuNTP)

According to the research group out of London, Ont.'s Western University, a tornado also touched down in Leamington, Ont. near Albuna Town Line and County Rd. 18 at around 9 p.m.

He says the storm in Leamington, Ont. touched down over a 2.5 km area where 145 km/h winds chewed up part of a green house before cuting a path through a woodlot.

"One patch of forest, more than 50 per cent forest, the trees were uprooted or snapped," he added.

Lavigne-Theriault says the science used to confirm tornadoes that weren't witnessed first hand relies on "the scars left behind" to piece things together.

"When trees fall all in the same direction that's a downburst, but ... in the Leamington, Ont. event there's tree fall that's erratic and converging into a centre point, which usually dictates that it was a tornado, not a downburst," says Lavigne-Theriault.

He says both tornadoes were confirmed by viewing the damage from above.

"When we can we send ground survey teams that go there and assess the damage and we also use satellites to complement all of that," he says. "There was actually four tornadoes in Ontario that day."

Environment Canada confirmed the validity of the research group's findings.

The tornado in Windsor, Ont. is confirmed to be an EF-0, the lowest strength rating — Leamington, Ont.'s storm was rated at EF-1.