The Detroit Field Office of U.S. Customs and Border Protection is reporting a record setting year when it comes to the seizure of drugs and guns at the border.

A 2021 year in review report shows drug enforcement operations at Michigan's five ports of entry netted 240 pounds of cocaine, 25.5 pounds of methamphetamine and 2.8 pounds of fentanyl.

"In fiscal year 2021, I'm proud to announce that our Customs and Border Protection officers here in the State of Michigan seized a record 14,324 pounds of marijuana. In addition to drugs, we also arrested 181 individuals and seized $5.6-million in currency." 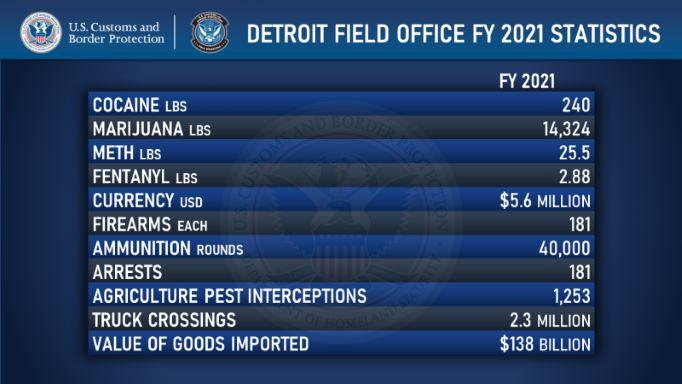 Perry says firearms, ammunition and agriculture pests were among other seizures.

"We also protected our communities by seizing 181 weapons and more than 40,000 rounds of ammunition. Our agriculture specialists intercepted 1,253 pests, which if left unchecked, could have done great harm to our nation's agriculture."

Detroit continues to be the second busiest truck crossing in the U.S. processing 2.3-million commercial trucks in 2021 — a nine per cent increase over 2020.