Six people have been displaced after a fire in Ford City.

Crews were called to the 1100 block of Drouillard Road near Richmond Street shortly after 5 p.m. Sunday for a fire in a multi-unit building.

"The fire started on the exterior, the rear of the building. It spread up the back of the building into the under hang and that got into the attic," he says. “The fire was burning above them when they were trying to fight it from the inside it became an unsafe situation for them so they pulled out and went to the exterior."

He says it took several hours to bring the blaze under control.

"Crews had a bit of a difficult time extinguishing the fire in the attic, it was hard to get to," says Lee.  "Having said that, the fire was finally extinguished, it took about three hours all total."

Lee says everyone got out safely and no one was hurt.

The cause of the fire is undetermined and damage is pegged at $475,000. 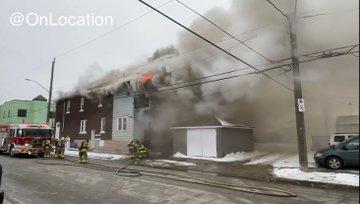 Windsor Fire and Rescue crews battle a fire in a multi-unit building on Drouillard Road. January 31, 2021. (Photo courtesy of @_OnLocation_)