An Essex town councillor refuses to remove tweets about COVID-19 some residents are calling xenophobic and racist.

Ward 3 Councillor Chris Vander Doelen took to Twitter Friday saying, "Damn. My test for the Chinese flu came back positive. So I have to lay low for another week — a punishment worse than the illness proved to be."

After receiving flack from twitter users, Vander Doelen fired back, tweeting, "I think this guy may have just invented a new hate crime: COVID shaming." 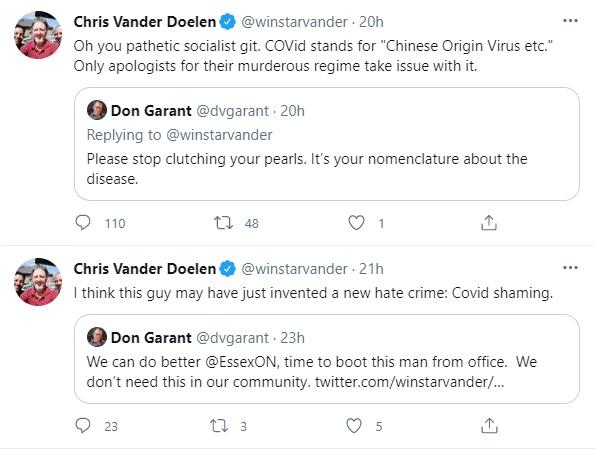 Several residents called Vander Doelen out for being xenophobic and contributing to hate towards Canada's Asian community.

He says that was not his intent.

"I don't walk around tiptoeing because of the way somebody else might see something, that's their problem," he says. "I can view the world the way I please and speak the way I please. Free speech is rapidly disappearing in this country and while I still have the ability to speak the truth I will and this is the truth."

"Well, I don't think you can ascribe someone elses violence to a third party who has no violent intent, which is what they're trying to do here," he says. "I have been a prominent enemy of the political left in this town for 25 years and they routinely come after me to try and shut me down."

Ward 2 Councillor Kim Verbeek sent an email to administration and her fellow council members calling for a "unified response" to Vander Doelen's statement.

“The Town of Essex denounces the language used by Councillor Vander Doelen in recent social media posts this week. There is no place for these kinds of statements in our community and they do not reflect the beliefs of Council nor the Town of Essex.

The impact of these kinds of statements is undeniable. As Head of Council, I have asked Councillor Vander Doelen to retract his statements and issue a public apology.

Council and I have received a significant number of phone calls, emails, and social media messages concerning this matter.

We appreciate everyone who has shared their concerns with us and we understand that official complaint(s) are in the process of being filed with the Integrity Commissioner, who has the independent authority to initiate investigations into the conduct of individual Council Members.

Council and I continue to be committed to making our community a place where everyone belongs.”

The Essex County Chinese Canadian Association (ECCCA) is disturbed that an elected official in the Town of Essex has made racist comments in his Twitter feed regarding COVID-19.

"It is unfortunate that he has been diagnosed with the illness and we hope for his speedy recovery.  However, his Twitter statement is unacceptable for someone in his position holding public office. For 45 years, the ECCCA has contributed positively to our Windsor and Essex community working with our partners in civil society.  We believe that Mr. Vander Doelen’s comments are unnecessary and harmful.

Calling his diagnosis the “China flu” is a racist slur that is demeaning not just as a xenophobic attack but also an open and broad disregard for the Chinese and Asian communities in Essex and the surrounding region.  Mr. Vander Doelen must surely be aware of the anti-Asian attacks in Canada over the past year — attacks that have, per capita, exceeded those reported in the U.S.

As an Essex Town Councillor and former columnist with The Windsor Star, his comments have a very real and damaging impact on Asian Canadian communities.  We ask Mr. Vander Doelen to apologize for his remarks and remove them from his Twitter feed.  We also ask that all elected leaders in Windsor and Essex County condemn anti-Asian racism and all forms of racism and work together with racialized communities to build a more tolerant and inclusive society. "

Vander Doelen tells AM800 News he will not be deleting the tweets.

"Maybe I'll take down the one about COVID-19, but I'm not taking down the one about having Chinese flu because that's what I had," he says. "I caught COVID-19, so that's not a joke. Twenty-three thousand Canadians have died and we know where this came from, so I guess I broke a big secret by saying that it came from China." 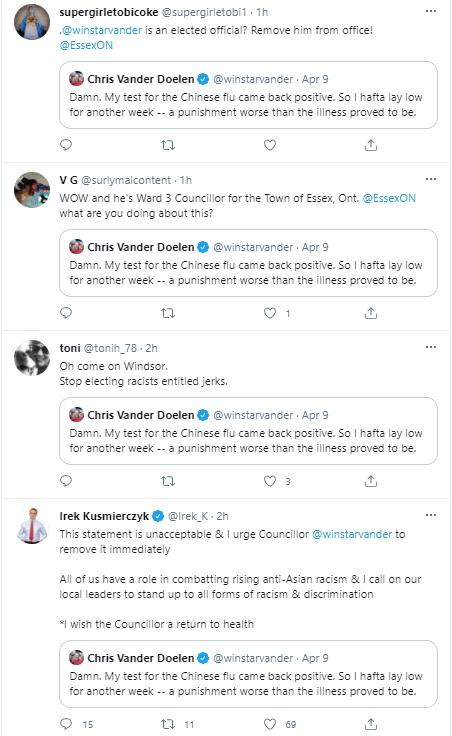